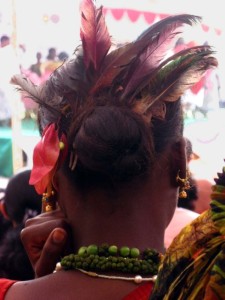 Despite attempts by the government to create awareness about superstition, a minor boy was married off to a bitch to ward of evil spirits at home in Manik Bazar area of Saraikela Kharsawan in Jharkhand.

The boy Mukesh had his first tooth in the upper jaw which is not considered a good omen in the tribal society and hence the marriage was conducted.

The tribal community believes by performing the marriage they will able to ward off bad omen. Such marriages are conducted between January 15 to 21 every year.

Heavy bride like make up was given to the bitch for the marriage.