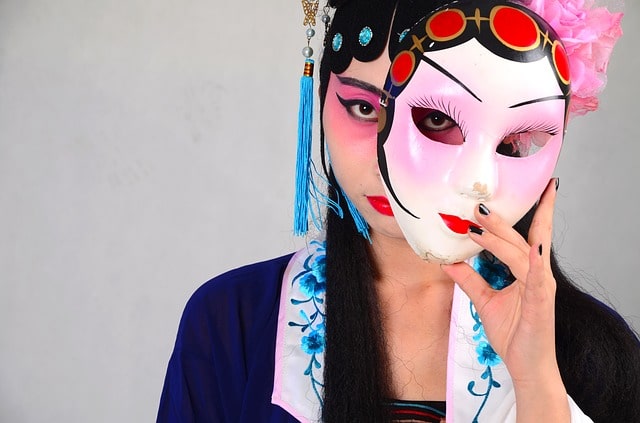 China has been  conscious of the fact that it needs to change the negative perception towards it of the outside world. It is on the whole seen as an authoritarian regime under an autocratic President  Xi whose power is enormous and unchallenged and to-day comparable to that enjoyed by the communist  founding father Mao Zedong. China is also seen as a country completely throttling democratic values domestically particularly as seen by the Western world. China wants this perception  to change and has been taking efforts towards the same .Thus,it cultivates political and economic elites in other countries  who as a matter of  self-interest  or conviction speak in favour of China.

Some of the arguments put forward in favour of China is that their  democracy is a little different from that of the Western world as they have to put in efforts to bring prosperity to the large number of poor people.
There is also what the author Hamilton  calls as arguments based on 'whereaboutism',i.e., if China is imperfect in regard to liberal values,so many things are wrong about the Western world as well.

However,  in the West there is effective oppostion  and systemic checks and balances. Further constitution provides fundamental  laws based on which the polity moves.There is economic freedom,  and in the normal course  trade is not linked to political objectives  in the same way as is the case   in China.The author  argues that particularly after coming to power of Xi, China has become more totalitarian and violative of the present world order . Hence, the fond hope that certain sections in the western world had that with integration of economy with themselves  , China would gradually change into an economic and political liberal society has not turned out to be true.Indeed the reverse has happened .

Therefore,if these countries do not wake up to the cynical exploitation of their economic and political system by China , they wiil find its emergence as the most poweful nation which does not believe in either a liberal society or a world order with the norms  as it is understood and practised to-day.Indeed if China ends up ruling, it is very widely believed that the world order will become totalitarian,opaque and coercive!

The author states that another  fear that China has is that  it not only needs a positive image internationally  so that other countries are forthcoming in its favour and to strike deals ,say,like BRI but the same  is essential for its internal security  and stability as well.

China is haunted by the fact that   if the Chinese people develop a feeling that they are being unduly ruled by an authoritarian regime ,the present political dispensation there will lose legitimacy and may have to face resistance and riots as it happened in the case of Tiananmen Square -    a blood-  blot that China has been trying to wipe out  with no success!No wonder it  also wants to promote 'democracy with Chinese characteristics' to counter criticism but has achieved hardly any success .

China is haunted by USSR's  experience that  led to its dissolution   in which the domestic populace played a damaging  role rising in defiance  believing totalitarianism to be prevalent there  as also continuously criticised  by the Western world.The world remembers 'glasnost' and 'perestroika' propounded by Mikhail Gorbachev and how the same  brought about the undoing of the USSR  as it existed.

To quote the author: China realises that "----Creating a favourable international public opinion environment is important for Chinese (internal)security and social stability".

Espionage has been a part of international politics and many countries indulge in it . We all have seen highly engrossing James Bond movies . However,author makes a distinction between the western espionage and that resorted to  by the Chinese. To quote:"Western espionage steal secrets  for military and strategic benefit . China'a espionage include personal lives,health status ,political affiliations ,sexual proclivitiesof Western leaders ,businessmen,university chiefs and opinion makers is used to build personal profiles and at times to coerce the targets."

Hence, when political parties of a country  take donations or any other favour from China or pay friendly visits,they need to be circumspect  as China always weaves any such activity into its political objective and finds out confidential details   to exploit the target's  vulnerabilities.

China has been trying to influence the educational systems of the targeted countries. For that it tries to oblige the important academicians by offering jobs in their own universities,or arranging for various educational trips to China or funding research or entering into university-to - university relations. .One of the methods is the establishing of apparently harmless looking  Confucius Institutes which first started in 2004  named after the revered philosopher Confucius .

Needless to add, like most other instances related to China ,these Institutes are supposed to subserve and further the interests of the Chinese Communist Party and act as its camouflaged propaganda machinery to influence the academicians  and the young minds on the university campus. These Institutes in addition to imparting the normal teachings,  are expected  to keep   an eye on the academic activities of the concerned universities,try to build  a pro-China opinion  and exploit financial or other vulnerabilities of these Institutions and people manning them to further pro-China narrative and subvert  the opposition to  it . Once they grow strong,they interfere in the activities of the universities when anything not favourable to them takes place.Relatively financially weaker universities are more susceptible to their pressure.

There has now been resistance in many universities to the interference by the Confucius Institutes and in several countries like France,America ,canada, Belgium , Sweden ,Australia and others . There have been instances of closures of this Institute and in some cases rules related to their operations have been made more restrictive  inclusive of scope for exercising scrutiny   .

To quote the author:  "Here too the goal is to mute criticism of the Party ,export its censorship norms and promote research that boosts the 'Chinese path',the 'Chinese system' and 'Chinese theories'.---Interference by Confucius Institutes in academic freedom ,freedom of expression and other personal rights has been documented in a large number of countries."

In  India, Confucius Institutes do exist but have not been able to spread to too many universities.  Fearing their possible  anti-India role  , in the aftermath of Ladakh Stand-off , Indian government raised the issue of reviewing the role of such Institutes.  Expectedly , as  in the  European counries, Chinese authorities in India were quick to  raise objection to the same .

Incidentally,  the author perceptively observes that  while China tries to exercise what it believes to be  'soft powers', it fails to realise that its  behavour turns ugly when countered due to  its deep-rooted  totalitarian system and ethos  which inherently lack democratic norm  of handling  based on debate and dissent or polite  persuasion .  It gets reflected in trenchant and threatening  words also involving   strong punishing actions deviating from traditional diplomatic niceties  .  To denote the aforesaid highly aggressive diplomatic style  of 21st century , a new epithet  used in the context of China is "Wolf warrior diplomacy", an expression taken from a Rambo -type   Chinese aggressive  film called Wolf Warrior 2 !

To quote the author :''Of course, an authoritarian power like China do not rely on 'soft power' but 'sharp power',the exercising of coercive and manipulative influence.Indeed this shows up in  Chinese debates on the subject which are always more coerced with the power aspect than with the soft."

In The Aftermath Of The Book:   World Sees Through   Chinese Game Faster And Better

In the book the author had bemoaned the element of ignorance exhibited by the Western World and North America in seeing through the Chinese geostrategic purpose and countering it.However, the developments of last couple of years or so have shown that belatedly but almost with a start their governments  have understood the situation and begun  countering the same with a sense of urgency and added punch.Chinese flip-flop on Wuhan Virus has been an epiphany for the Western world. One may even hold  that  the gloves  on both sides  are off ! There are repeated acrimonious exchange of words.  In the meantime China has grown in strength and influence whereby it feels emboldened  to challenge America and others with impunity.

That is how we witness the trade war against China  initiated by The United States during the tenure of President Donald Trump placing the former to much discomfiture.The strengthening of QUAD(Quadrilateral Security Dialogue)for a free and open Indo-Pacific  and basically meant to counter the rising maritime strength of China in this region  is another example.QUAD countries are India, Australia, America and Japan. They had their first virtual summit in March,2021.

To reduce dependence on China in regard to manufacturing,efforts are on to shift the same to other countries .The world has started speaking with greater unity against the human rights violation of Muslim  Uyghurs .  Xinjiang cotton was  boycotted by European Union , Britain, Canada and America as the first  multilateral sanctions against the forced labour of Uyghurs in this regard . China  has politically reacted by boycotting brands like Nike and H&M .FDI rules have been tightened to restrict and monitor Chinese investments in several of these countries .Examples can be multiplied but the basic underscoring fact  is that China's political strategems have begun to be unravelled, much  better understood  and acted against!

China had been  trying for last three or four decades to spread its political and economic tentacles in India in  a variety of outwardly palatable  forms almost unabated and not sufficiently understood by the latter . In the wake of   Wuhan Virus  and subsequent Ladakh  Stand-off, a series of steps have been taken by the Indian Government to counter China's  not only economically but also strategically harmful influence .

Thus,FDI rules have been tightened by India to restrict and scrutinise Chinese investments. No border country (meant for China)can invest without the approval of the Government.E-Commerce companies are now required to mention the  country of origin of their goods.The idea is to reduce Chinese import .There is  a strong anti-China sentiment within India which can be exploited by the government. Indian government is regulating social media platform as the same poses security threats.India banned more than two hundred Chinese mobile   Applications including the popular Tik-Tok  considering them as prejudicial to sovereignty and integrity of the nation.In China details related to individuals collected by them can whenever asked for will  get shared with the government to be potentially  used for inimical purposes.

Thus, the Western world and North America seem to have awakened  now  and have  started responding  to China  as had been wished for  by Clive Hamilton in his highly acclaimed     and  engaging  present book .In it he treaded the largely untrodden path of highlighting the role of the 'hidden hand'of Chinese Communist Party in reshaping the world for dominance -something that the targeted countries  had failed to perceive timely   and  grapple with effectively .This also  holds lessons for India   !