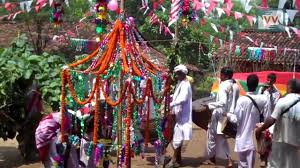 All entry-exit roads of Ranchi, capital of Jharkhand, have been blocked to allow Adivasis to dance and sing on the occasion of their annual Puja of a tree-Karma.

As per the traffic guidelines issued by the Ranchi Traffic police,11 “drop gates”  have been put up on entry-exit roads that connect the city with outside the state. And policemen were deployed on a large scale to maintain smooth movement of the dancing- singing procession of Adivasis.

A first-of-its-kind initiative of the traffic police was an outcome of a gradual rise in the number of participants in the Karma Puja followed by a dance-song procession of Adivasis in Ranchi.

“To make the movement of business vehicles from entry and exit points of the city, traffic was diverted to ring roads so that there is no jam anywhere”, said a senior traffic officer of the police in Ranchi.

Incidentally, Karma is practiced by all aboriginal and native Adivasis, especially Mundas and Oraons in the month of Bhado( August-September) in Jharkhand, West Bengal, Chhattisgarh, MP, and Odisha.

The festival is connected with a tree of Karam-scientifically named Naicker Parvifoia-and thereby the belief and rituals followed and practiced by Adivasis are organically a mechanism to protect and promote nature, a feature, humans must follow to deal with Climate change, a serious global problem faced by the planet today.

Among Adivasis, there are multiple versions of the story behind the origin of Karma Puja. Anthropologist Hari Mohan in his book published by Bihar Tribal Welfare Research Institute, Ranchi, 1973, writes, on the basis of his research, that - “Karma branch is brought by unmarried boys and girls. It is planted in the courtyard on the day of Karma. They then pour milk on it and girls offer flowers, Kasaili(Beatle Nut),  Acchat(Arwa Rice), and flour cakes to the deity. After the rituals are over in the night the story is narrated which is as follows:

“Once upon a time there were seven brothers who laboured hard at agriculture work.They had no time even for lunch;therefore,their wives carried their lunches to the field daily.Once it so happened that their wives did not bring the lunches for them. They were hungry. In the evening they returned home and found that their wives were dancing and singing near a branch of Karam tree in the courtyard. This made them angry, and one of them brothers lost his temper.He snatched the Karam branch and threw it into the river.The Karam deity was insulted;as a result,the economic condition of their family continued to deteriorate and they were brought to the point of starvation.One day a Brahman) priest) came to them, and the seven brothers then told him the whole story. The seven brothers then left the village in search of the Karam ‘Rani’( Queen).They kept on moving from place to place and,one day, they found the Karam tree. Subsequently, they worshiped it and their economic condition began to improve.”( The Chero: A study in Aculturation,Bihar Tribal Welfare Research Insitute,1971,page 95).

As per the tradition, Adivasi male and female sing and dance around the courtyard of the Karam Rani in the night.

Over the years,as time passed, the Adivasis started performing rituals, followed by dance and song in the night.The festivity continued next day.

Now, the state government has declared the day as holiday. So,while all state government offices were closed, main points of several roads were decorated with flowers.The pandals serving water and cold drinks free of cost have come up to Karma dancers and processionists.

Jharkhand CM Hemant Soren who appeared to be on the Cloud -9 after winning the trust vote on floor of the Assembly on Monday amid allegation of misusing his authority to gain stone mining lease and boycott by the BJP, has given a message to Adivasis: “ Celebrate Karam festival. But come when I call you.”