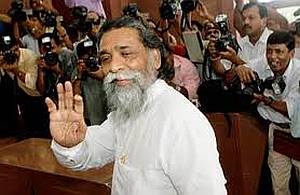 The ruling Jharkhand Mukti Morcha President Shibu Soren has backed the demand of Gorkhaland and Telengana.

Speaking to a popular Hindi Daily,published simultaneously from Ranchi, Patna, Jamshedpur, Dhanbad, Deoghar, Kolkata, Silliguri,Muzaffarpur,Bhagalpur and Gaya,Shibu Soren said that he has always been a strong supporter of Gorkhaland and Telengana.

”These states should be created in the interests of the people”,he told Prabhat Khabar’s Sunil Choudhary in an exclusive interview.

Soren expressed the view that before Jharkhand was created,there was a widespread expectation that the process of development will accelerate with its creation.”But development takes time to take off.The need of the hour is to do good work.If politicians will not work,they will be beaten up by the people”,he said.

“If the people become aware,then the officers will automatically become tight.To gain their own rights,the people will have to come out”,said Soren.

When Choudhary asked him how was his son Hemant Soren working as Chief Minister,Shibu said he was doing a good job.”I have taught, him since his childhood.Now he is capable to run the government.He does not indulge in give and take.He does not lie.(I) have advised him to keep away from give and take”,said the veteran tribal leader.