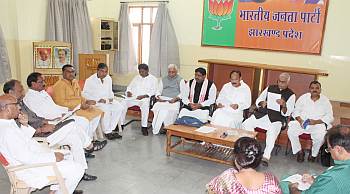 BJP leaders hold meeting inside their headquarter office in Ranchi on Saturday. Pics by Ratan Lal

Ahead of its rivals belonging to the Congress,the BJP will hold a meeting of its top leaders in Jharkhand to chalk out plan and strategy for the Lok Sabha elections,2014.The meeting will take place in Ranchi on August 24-25.

Naidu,who had visited Kolkata yesterday,where the BJP was gearing up to be on poll mode,also addressed the media persons and criticized the Congress led UPA government for perpetrating the most corrupt regime under Prime Minister Manmohan Singh and Congress president Sonia Gandhi India had ever seen in the past.