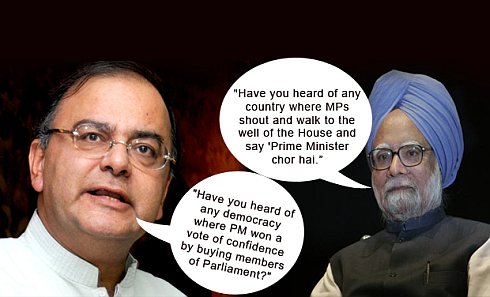 No policy decision on falling economy.No talk on the falling economy which showed that the growth rate in the first quarter of the current fiscal(April 1-Aug 30) was little above 4. percent.

But the Rajya Sabha today recorded an interesting exchange of exclamations -questions.

First to attack on the BJP-led opposition for disrupting Parliamentary proceedings, Prime Minister Manmohan Singh asked Rajya Sabha Arun Jaitley:””Have you heard of any country where MPs shout and walk to the well of the House and say ‘Prime Minister chor hai.(Prime Minister is Thief).

Jaitley was quick to counter question him :”Have you heard of any democracy where PM won a vote of confidence by buying members of Parliament?”