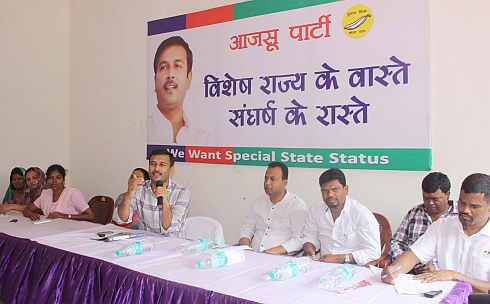 ‘Vishesh Rajya Ke Vaste;Sangharsh Ke Raste'(For the Special Status to Jharkhand;Struggle was a way out).

Bill boards have come up in Ranchi carrying this slogan.The slogan and the bill boards were put up by All Jharkhand Students Union led by former Deputy Chief Minister Sudesh Mahato.

In fact,after former Chief Minister Arjun Munda raised this demand early this year,all parties including the ruling Jharkhand Mukti Morcha has picked it up as a demand to harp about.Toward the same end,JMM chief Shibu Soren and Chief Minister Hemant Soren have met the Congress leaders in New Delhi and asked them to fulfill it.

AJSU’s top brass led by Mahato today held a meeting and chalked out ways to carry forward this demand with an eye on the forthcoming elections-both Lok Sabha and the Assembly-slated to be held in 2014.