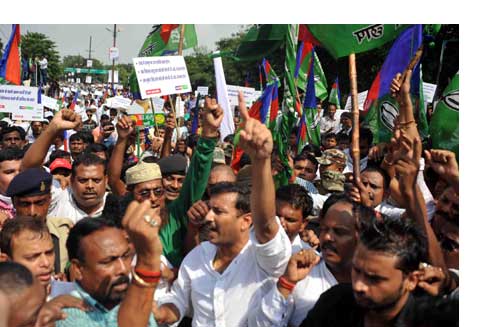 All Jharkhand Students Union activists led by its President and former Deputy Chief Minister Sudesh Mahato demonstrated infront of the Governor’s official residence in protest against the failure of the state government to control crime in Jharkhand.

The protest was carried by hundreds of AJSU activists despite the deployment of a large section of the policemen who had blocked all roads leading to the Rajbhawan.This led to traffic jam at several places in Ranchi,causing untold miseries to the people.

However,ahead of the Assembly elections due in December-January,all parties were busy showing they were working for the cause of the people.And as such,AJSU’s protest in front of the Rajbhawan was launched for half a dozen problems faced by the people.

Later,AJSU leaders including Mahato met the Governor and handed over a memorandum asking him to intervene and helf the people who were affected by these problems.Though the Governor received their memorandum,he made no comitment before them.