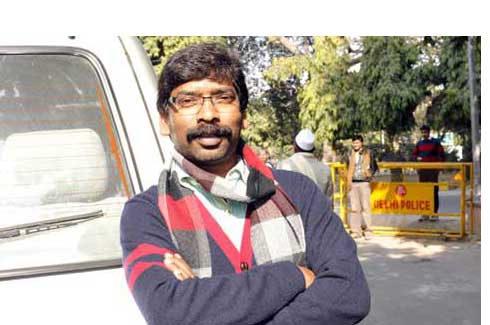 Two moves of the UPA government in Jharkhand have added hope for the Chief Minister Hemant Soren to gain ground during the Assembly poll in Jharkhand.

Ahead of the poll expected in December-January 2015,the UPA comprising Jharkhand Mukti Morcha,Congress,RJD and JD(U) has decided to join hands and put up a single candidate against the BJP in all 81 Constituencies.

A proposal discussed and almost agreed upon the JMM-Congress indicates as follows:One, Soren will lead the allies including the Congress during the polls.Two,JMM and Congress will contest 39 and 32 seats respectively.As many as 10 seats may be given to the RJD and JD(U).

If this proposal is accepted by these parties,most Constituencies are expected to witness one to one fight between the UPA and the BJP making it a tough challenge for the latter to sail through.

The second move taken by the Soren government is to organize a meeting of the state’s women for thei empowerment.Expected to be held in Ranchi on October 18,nearly 45,000 women from across the state are expected to participate in it.

Though no body knows about the impact of this 50 percent reservation on women, Soren had made smart effort  ahead of the polls by picking up an old issue that had left the state’s people divided.The issue -Insider versus outsider-was raised by Soren on Sunday when he said that BJP’s 8 out of 12 MPs were ‘outsiders.’

By highlighting this,Soren has sought to mobilise the electorates, especially a  vast group of Adivasis  who believed that ‘outsiders’ were responsible for ‘misgovernance’,’crime’,’land mafia’,and so on. Since his statement was hated by non Adivasis,who were in vast majority,BJP has criticized him and said that there is  no insider outsider.

”Many Adivasis of the Birhor tribe dub Santhals as outsiders who had landed much after them. Even Oraons and Mundas had come to this state from outside.And as such,we think we all are Indians and any body who lived in this state since Jharkhand was created in 2000 was its citizen”,said Ranjit Mahato,a school teacher belonging to the BJP.