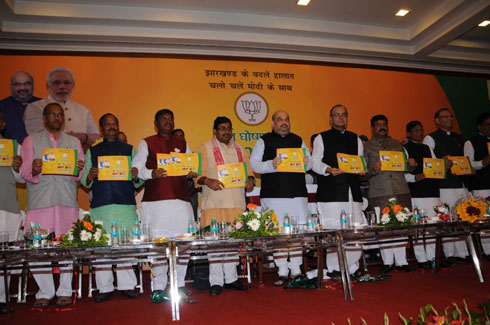 To make itself committed to the cause of development of Jharkhand,BJP today released its manifesto-Jan Ghoshna Patra.

Issued at Hotel BNR,the Patra promises to provide employment to the youths by opening up the State for its  “Make in India”programme.” In accordance with the needs and demands of the people of the village and cities, Jharkhand can be made the country’s “House of Power”, said Munda.

Roy who explained the Patra by putting up power point presentation,said the products to be made for the Prime Minister Narendra Modi’s “Make in India” can be made in this state.” It would be called “Make in Jharkhand”, said Roy.