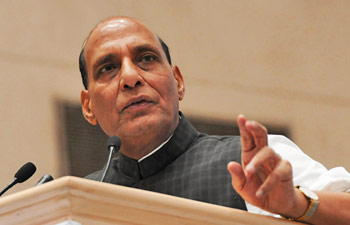 Union Home Minister Rajnath Singh today appealed to the Naxals to give up violence and join the mainstream to strengthen the country.

He addressed a series of public meetings ahead of the five-phased Assembly elections in the state and urged the voters to give a clear mandate in favour of the BJP so that the state government could work in tandem with the Central government to ensure speedy development of Jharkhand.

While appealing to all Maoists to shun violence, he gave the example of China where Maoism was born but it was shedding Maoism and emerging as a strong nation to compete with the United States. He appealed to Maoists to join the mainstream and help make the country strong.

The Minister said one could clearly distinguish between the states governed by the BJP and others, maintaining that the states under the BJP have progressed well.

“One can make a clear comparison anywhere in the country. The country has emerged stronger under the leadership of Prime Minister Narendra Modi,” added Mr. Singh.