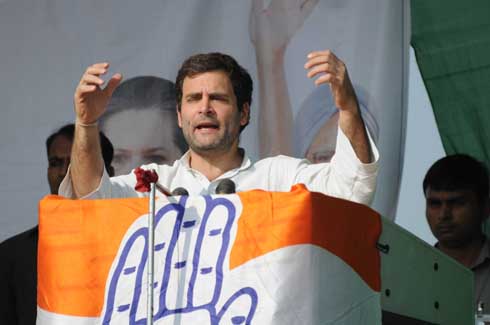 Congress vice-president Rahul Gandhi lashed out at  Prime Minister Narendra Modi while addressing an election rally in poll-bound Jharkhand. He said, “There is no dearth of funds and resources in Jharkhand but who is benefitting out of this, people of Jharkhand or industrialist from outside the state”.

“In Lok Sabha you gave 12 seats to the BJP. Has Jharkhand or country changed as NaMo had promised during campaigning,” added Rahul.

He accused the Central Government of changing all the schemes the Congress had launched for the poor and said that the BJP gives money very easily to the rich people.

“Industrialist get thousands of crore loan by the SBI in two minutes. We don’t want such a government, ” quipped Rahul.

Hitting at the BJP’s  divisive politics, he said they think it would benefit them. Clean India Campaign became a marketing strategy, development was promised but they gave broom in your hands. Marketing and photo ops do not contribute to the development of the nation, said Rahul.

Taking a dig at ‘acche din, Rahul Gandhi asked people has their life improved and added the UPA government worked for the poor.

He said Prime Minister has only flown in planes with industrialists in Australia.