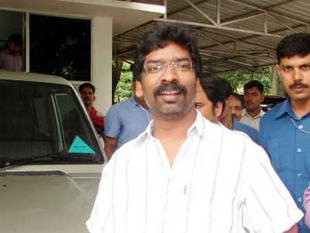 Jharkhand Chief Minister Hemant Soren today described the Bharatiya Janata Party as a party of “loot”. This allegation he made in response to  Prime Minister Narendra Modi’s appeal a day before to the people in Santhal Pargana region to throw “looters” (JMM) out of power in the ensuing Assembly elections.

Soren said this while addressing separate meetings in Pakur and Maheshpur Assembly constituencies. “The BJP has eyes on mineral resources of Jharkhand,” added Soren alleging that the resources would be given to traders from outside Jharkhand.

Appealing to vote for the JMM for the development of the state, Soren further alleged that both the Congress and the BJP were opportunists and have “cheated” the tribals.

Interestingly, the JMM is now ruling Jharkhand with the support of the Congress, RJD and JDU.