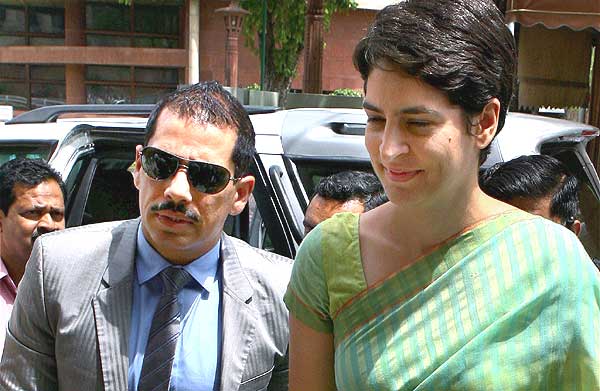 Controversy over the Congress chairperson Sonia Gandhi’s son in law Robert Vadra’s property is becoming crunchy and crunchy by the day.What is raisng eye brows in public is that the ruling Congress bandwagon has jumped into the arena defending Vadra who was not even elected from any constituency-Assembly or Lok Sabha- on its ticket so far.This has given a baton to the opposition BJP to beat it with.”This is a big shame”,hisses Sudhir Singh,a worker of the BJP.

After two India Against Corruption(IAC) members- Arvind Kejriwal and Prashant Bhushan-alleged on Friday that Vadra had bought DLF’s properties in Gurgaon and other places at rates cheaper than in market and sold these at a huge profit,the grand old party had come out in his defence.

Sadly,Vadra instead of countering their allegations had indulged in hurling counter allegations.Their allegations are misrepresentation of facts,said Vadra in a statement which appeared to have been drafted by his lawyer.

”IAC members were deliberately misrepresenting numbers contained in his financial statements, manufacturing lies and maligning family to gain cheap publicity for themselves and for the launch of their political party”,said the statement describing Kejriwal’s allegation as “utterly false, entirely baseless and defamatory”.

Further Kejriwal has dared Vadra to file defamation case against him saying that India is a democratic country where every citizen had a right to express his/her opnion.” The son-in-law of the most powerful person in the country should address the issue.But he is not doing it and is shooting the messenger,”said Kejriwal.