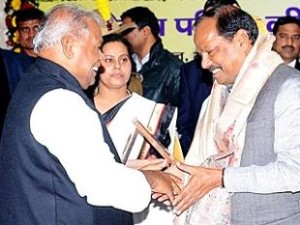 In a significant development, Bihar and Jharkhand have agreed to settle their bilateral issues through discussion instead of finding a legal way out by approaching the High Courts and the Supreme Court.
A decision in this regard was taken in Patna by the two states at the meeting of Eastern Zonal Council. A committee will be set up to take up the contentious issues for the resolution in the interest of both the states.
“Our culture and heritage are similar. Our present condition is similar due to various historical, political and social reasons. Our problems are also similar. We need to solve our issues by coming together,” Bihar Chief Minister Jitan Ram Manjhi said. Jharkhand Chief Minister Raghubar Das also echoed the sentiments.
He said, “We have decided to form a standing committee to solve inter-state issues and improve our relations. Representatives of Bihar, Jharkhand and the Centre will be part of it. We need not got to court to solve our problems. Both states could take decisions in their own interest”.