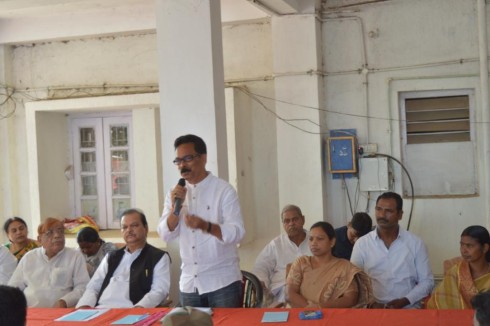 Out to gain ground and win the forthcoming Lohardaga Assembly By poll,Jharkhand unit of the Congress has stepped up preparations to consolidate its support base in Lohardaga.

The party led by former MP Subodh Kant Sahay and the state unit President Sukhdeo Bhagat has activised its workers and held a meeting in Ranchi to contest the forthcoming Assembly by poll in Lohardaga (Scheduled Tribe Reserve) Assembly Constituency in Jharkhand.

Today,Sahay and Bhagat presided over the party’s meeting and vowed to try their best to win the Assembly By poll in Lohardaga.

Later, Mahto presided over another function with party leaders of various panchayats in Lohardaga district.Earlier,mahto had led the party’s “nyaya yatra” campaign.

Lohardaga Assembly By poll was necessitated by the conviction and seven years’ rigorous imprisonment of its MLA Kamal Kishore Bhagat of All Jharkhand Sudents Union,the ruling BJP’s ally, in an attempt to murder case in July this year.

Though AJSU is set to put up its candidate,Congress plan to again put up its leader Sukhdeo Bhagat as its candidate who was defeated by AJSU’s Kamal Kishore Bhagat in the Assembly poll 2014.

Ratan Lal’s picture shows Congressmen holding meeting in Ranchi,chalking out plan to win the forthcoming Assembly By poll in Lohardaga.