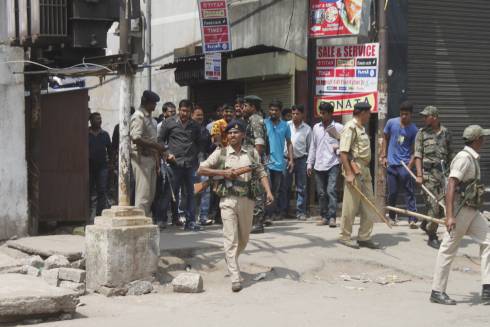 Ratan Lalâ€™s picture shows the scene of tension near Main Road,Ranchi,capital of Jharkhand.

The Assembly elections are taking place in Bihar.And politics have caused ‘meat problem’ in Jharkhand capital.

Days after beef was recovered from outside one temple in Ranchi’s Doranda locality on the night of Bakr Id/Eid ul-Adha(Friday),meat was found outside two temples in Ranchi on Monday.

Today morning,many localities including Ghaus Nagar, Manitola, Pokhartoli near Hinoo locality witnessed violence since last night.Even firing was reported between Muslims and Hindus in Doranda locality with the result that many sections of the police were deployed in the area and several schools including Guru Nanak Higher Secondary School were closed after students and teahchers arrived and classes took place.

Though normal life was returning to take place in the entire city,www.jharkhandstatenews.com conducted a survey at the affected areas to know who were throwing the meat infront of temples and what was the opinion of the comman man belonging to both communities.

“Since no body has seen any body throwing the meat,we can not blame any one”,said Junaid Ahmed at Doranda.

Asked if ruling BJP and the RSS were behind these events,Ahmed said:”We can not blame any body as no body has seen any one.In any case,who ever has done it,whether they belong to the Muslim or Hindu community,must be booked.Because it is a serious crime to throw meat infront of a temple and cause communal tension.”

Surprisingly,even some BJP and RSS workers have come forward to appeal to people to maintain unity and help the police catch the culprit.

In Doranda,a resident belonging to the Congress party,who does not want to be named,confided that the crime was committed by a group of his partymen to defame the ruling BJP-RSS so that the Congress-JD(U)-RJD gain political mileage in Bihar.

”I have solid information that the partymen have stooped down to this level to gain ground against the BJP in Bihar-Jharkhand”,he said preferring anonymity.

“I have also learnt that the party(Congress)is going to use its wings such as NSUI and INTUC to paralyse universities and PSUs in near future to defame the ruling BJP government in the State(Jharkhand)and at the Centre”,said another ex Congress leader.

While the police is yet to catch the culprits,these meat incidents have caused law and order problem in Jharkhand’s capital city, ahead of Assembly elections in Bihar and festival of Dassehra-Durga Puja-Diwali-Chhat -season across the country.

Incidentally,meat was also found outside a Masjid in Ormanjhi,24 KM from Ranchi.