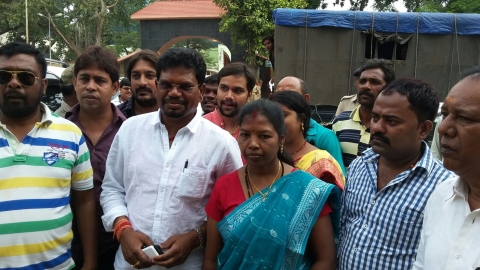 Three days after All Jharkhand Students Union leader Kamal Kishore Bhagat,who had lost his Assembly membership after being convicted in an attempt to murder case,got married on October 4,surrendered to a court only to return to Ranchi central jail today.

Bhagat had married Niru Shanti in presence of party leaders including Jharkhand Water Resources Minister Chandraprakash Choudhary and AJSU President Sudesh Mahto.Earlier,he was convicted in an attempt to murder case,jailed and lost the post of MLA from Lohardaga.

In fact,Bhagat had won the Lohardaga Scheduled Tribe Reserve Assembly constituency twice,first time in 2009 and second time in 2014 as a Ajsu candidate.Since he got disqualified to hold the post of MLA after his conviction,and the Lohardaga ST Assembly seat fell vacant for the by poll slated to be held soon,he deemed it fit to get married only to make his wife Niru Shanti contest the by poll in Lohardaga on AJSU ticket,it is learnt.

The other facts about his case were:

One,he had obtained bail from the High Court, and appealed against the seven-year-sentence awarded to him by a lower court in connection with an attack on a Ranchi-based doctor in 1993.Two,last month,the Jharkhand High Court had reduced the sentence to five years and asked Bhagat to surrender within fifteen days.

Now,it remains to be seen whether AJSU provides ticket to his wife and its ally and the ruling BJP accepts Niru as a candidate in the forthcoming Lohardaga Assembly by poll.