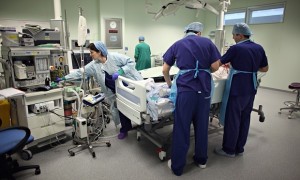 Curofy, the doctors’ networking app, conducted a survey among 2,000 doctors to ascertain whether they felt safe during their practice or not and the results were startling, says a press release. Two out of three doctors polled said they did not feel safe at the hospitals.

The survey was conducted among doctors across several states in the country and routed through the Curofy app that has become popular among Indian doctors as a platform for exchange of cases, discussions and information updation.

The concerns on doctor safety have been mounting such that two-thirds of doctors responding to the survey said that they are not feeling safe while being at the hospitals.

Around 80 per cent of respondents said that media was not highlighting the issue of doctor safety and rampant violence against them as adequately as it is highlighting other issues prevalent in the society.

On being questioned, 42 per cent of the doctors said that they have themselves been a victim of violence by the patient attendants.

Emotional outbursts after negative patient outcome ranked among the highest reasons at 66 per cent that led to this violence. And violent/drunk attendants formed a sizable one-fourth of their population to indulge in violence against doctors.