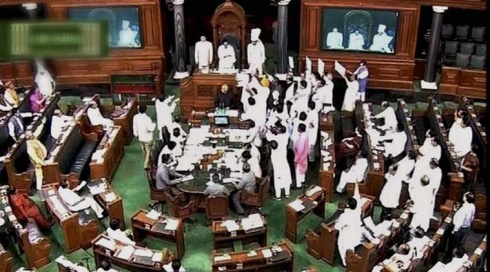 Azad talked about the hanging of two cattle traders in Latehar last month.In fact,the bodies of Md.Mailoom(35)and Inayatullah Khan(12) were found hanging from a tree in Jhabar village under Balumath police station area in Latehar.

Today,during the zero hour,Azad demanded setting up of a Parliamentary Committee to probe the case.He also accused the state government of not taking action to check the violent incidents that erupted in Jharkhand after the bodies were found hanging.

Soon,Members of the Congress,SP,JD(U) and CPI(M) got up and entered into the Well raising slogans with some even demanding dismissal of the BJP government in Jharkhand.