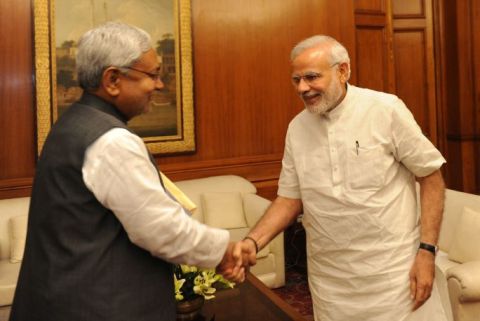 Prime Minister Narendra Modi who held ‘corrupts’ responsible for raising voice against demonetisation of high currency notes,was give an advice by Bihar Chief Minister Nitish Kumar who had repeatedly supported his move

Kumar,Janata Dal(United) President,said in Patna that his party favoured demonetisation.”To completely root out black money from the system,the PM Narendra Modi must unleash a war on “benami property” in which black money hoarders had saved their unaccounted wealth”,said Bihar CM.

Addressing the function of “Political workers’ organised by the JD(U),Kumar said “Demonetisation alone will not serve the purpose.The Government must bring back the cash stashed away in the foreign banks.Also,people invest heavily in jewellery to store their black money.Strong steps are needed to needle the root cause of generation of black money in the country”,the Bihar CM said.