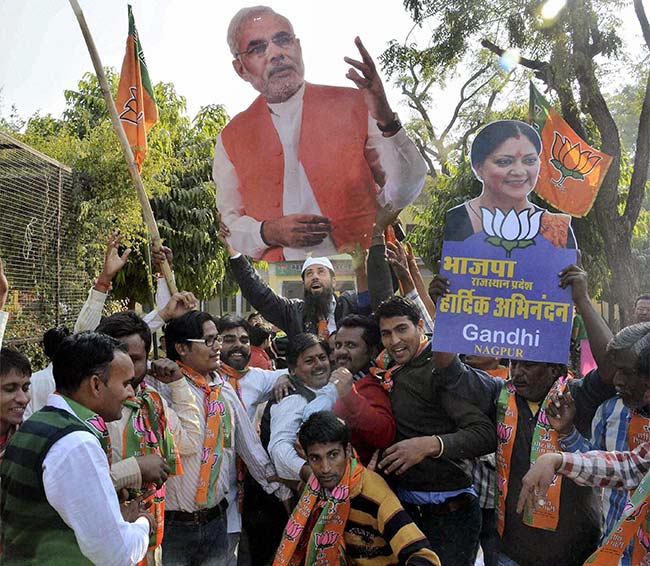 The BJP rode a Modi wave in Uttar Pradesh , with the party now leading in over 300 of the state's 403 seats. Similarly,it defeated the Congress in Uttrakhand where the BJP is set to form the government.In Punjab,the electorates have wiped out the Akali Dal and its ally the BJP and given the Congress another chance after 10 years and Arvind Kejriwal's Aam Aadmi Party is likely to be the day's biggest loser.

In Goa and Manipur,the BJP and the Congress were neck to neck.Votes are being counted for assembly elections in these five states.However,the BJP’s land slide victory in Utter Pradesh and Uttrakhand has strengthened the hands of the BJP led by its President Amit Shah and Prime Minister Narendra Modi.

A common belief among the neutral voters across the country is the BJP’s sweeping Assembly polls in UP and Uttrakhand is largely due to people’s faith in the Prime Minister Narendra Modi and his charismatic personality.Reacting to the BJP’s victory many leaders have welcomed the election results.Here are their quotable quotes:

"Historic mandate," said BJP chief Amit Shah, who arrived at the party's headquarters in Delhi on Saturday afternoon to meet the jubilant party workers. He said the "politics of appeasement has been rejected, everybody wants development." Mr Shah attributed the party's win to PM Modi calling him ‘the most popular leader eversince independence.’

Chief Minister Akhilesh Yadav's Samajwadi Party, which contested in partnership with the Congress, has accepted defeat.Jharkhand ex Chief Minister Arjun Munda said:’Our party has moved miles and miles forward across the country due to two great persoanlites-Prime Minister Narendra Modi and President Amit Shah.Under their hard and committed work,our party has become a people’s party across the country.’