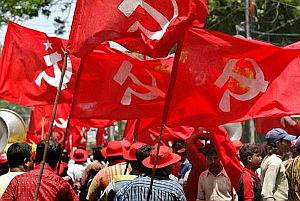 The CPI-M’s Adivasi wing described the BJP led coalition government in Jharkhand as “anti tribal” today and decided to hold a rally at Argora Maidan in Ranchi on November 6.The rally slated to be held under the banner of the CPI-M’s Adivasi Adhikar Rashtriya Manch(AARM),will be addressed by a galaxy of its leaders including the Manch’s president and its MP Baju Ban Riyan,Ex MP Brinda Karat and Tripura’s Rural Development Minister Jiten Choudhary.

The AARM’s decision to organize the rally in the capital of Jharkhand where the CPI-M does not have a single MLA in its 81 member Assembly,was apparently motivated to oil its party machine and mobilise tribals across Jharkhand.”We are committed to fight for the Adivasis”,AARM’s state head and CPI-M’s ex MLA Rajendra Singh Munda said.

On the day of the rally,AARM will hand over a memorandum to the Governor Syed Ahmad demanding interalia-implementation of the Tribal Sub-Plan,enforcement of Chotanagpur and Santhal Pargana Land Tenancy Acts ‘strictly’,inclusion of all tribals into the Below Poverty Line list,end of forcible land acquisition,empowerment of the panchayats in Jharkhand and setting up of a judicial commission to look into the grievances of the displaced people n Jharkhand.