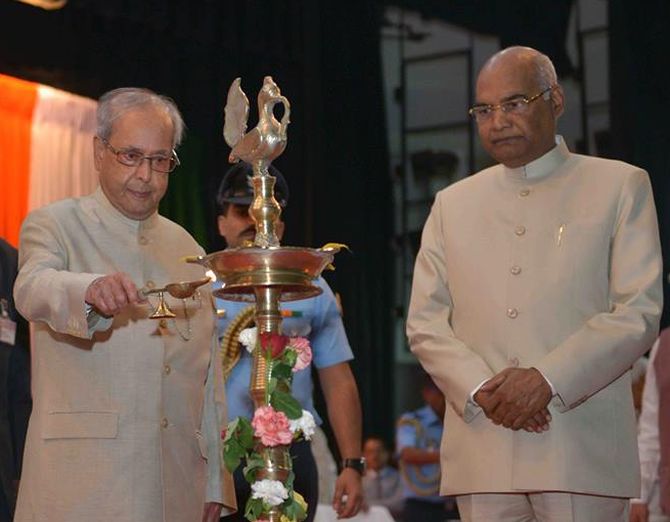 As BJP Parliamentary Board decided Ram Nath Kovind's candidature for the top post of President of India and the ruling party President Amit Shah made it public in New Delhi,the Opposition leaders preferred to maintain silence.

"What is there to say",asked Dina Ram,a sweeper,who is associated with Bahujan Samaj Party."We support his candidature",he said unaware of the fact that BSP chief Mayawati.

Ram's opinion is symptomatic of the general opinion of the people belonging to the Dalit,OBCs and farward castes in Jharkhand.However,Sunil Gojhu,a school teacher,said:"Since the ruling BJP was facing the charge that Dalits were sidelined and incidents of atrocities had increased in UP ruled by the BJP,its leaders played the Dalit card and selected Kovindji's candidature",he said.

Though he is going to be the Presidential candidate of the BJP and its allies of the NDA,the Opposition parties may not gain strength to oppose him.And as such,he is set to become the President of India.
Yet,in Jharkhand,where 27 percent people belong to the Scheduled Tribe(Adivasis),reports in the media had raised possibility that the BJP led by Prime Minister Narendra Modi may select Governor Draupadi Murmu as presidential candidate.

Against this backdrop,none of  five Adivasis www.jharkhandstatenews.com talked  to in Ranchi spoke in favour of the BJP's decision."We expected Modiji will select her(Governor Draupadi Murmu) and make Adivasi woman as the first president of India.Unfortunately,this did not happen",said Sagnu Oraon,a school teacher echoing sentiments of many Adivasis in this state.

In any case,Kovind is widely respected among political circles for his integrity and people remember his family to have led an abstemious lifestyle during his political career, including when he was a Rajya Sabha member from 1994 to 2006.

2.By profession,he is an advocate;served the Union Govt as its Advocate in the Delhi High Court during 1977-79.The Central Government's Standing Counsel in the Supreme Court in 1978.
He practiced in the Delhi High Court and the Supreme Court for 16 years until 1993.He served as member of several important Parliamentary committees including Welfare of Scheduled castes/Tribes/Home Affairs.