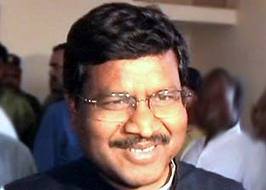 Santhal Pargana has been a stronghold of Shibu Soren for long.Now,Babulal Marandi is trying to spread his foot hold there.Marandi,who is president of Jharkhand Vikas Morcha,today threatened to observe a state-wide shutdown on November 22 if its demand for a tri-partite agreement with Panem Coal Mines was not accepted by the state government.

He said:”We will start economic blockade in the Santhal Parganas region from November 21 and Jharkhand bandh on the following day in support of the demand.”

Though Soren was resting in Bokaro,Marandi was on a dharna at Pachuwara in Pakur district since Friday to press for the demand.He told reporters that if the existing agreement between the private coal mining company-Panem -and the villagers of Pachuwara was of any indication,the company was supposed to complete all welfare projects at Pachuwara by 2007.

But this had not happened till date,said Marandi.”The people of Pachuwara and Aluweda villages would be benefitted if this agreement was honoured by the company”,he said.

“I will not end agitation until the demand was met”,said Marandi.