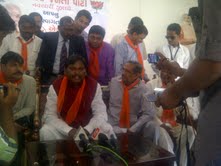 Jharkhand Chief Minister Arjun Munda spoke to residents of Degam and Gandevi villages in Gujarat’s Navsari district,located on coastline of Arabian sea.This was part of the election campaign launched by the BJP to mobilise votes for Gujarat Chief Minister Narendra Modi in the coming Assembly elections there.

Degam and Gandevi in Navsari have a sizeable section of Adivasi electorates.The BJP deemed it fit to use Munda,who has emerged as a popular Adivasi leader,to garner their support.

During his specch,Munda exhorted the people of Gujarat to ensure that the party led by Modi got a massive victory.He also talked about measures his government had initiated to bring about inclusive development in Jharkhand.

In the evening,Munda air dashed to New Delhi where he inspected the Pavallion put up by Jharkhand at IITF and talked to media persons.”By putting up exhibition at IITF,we have tried to reflect the outline of inclusive development in Jharkhand”,said Munda.

Munda said that his government’s first priority was to develop infrastructure.In the power sector,effort has been made to deal with the problem of energy with minimum of investment.

Taking about the start of production at private Adhunik power plant in Saraikela –Kharsawan,he said more such plants are scheduled to be commissioned.