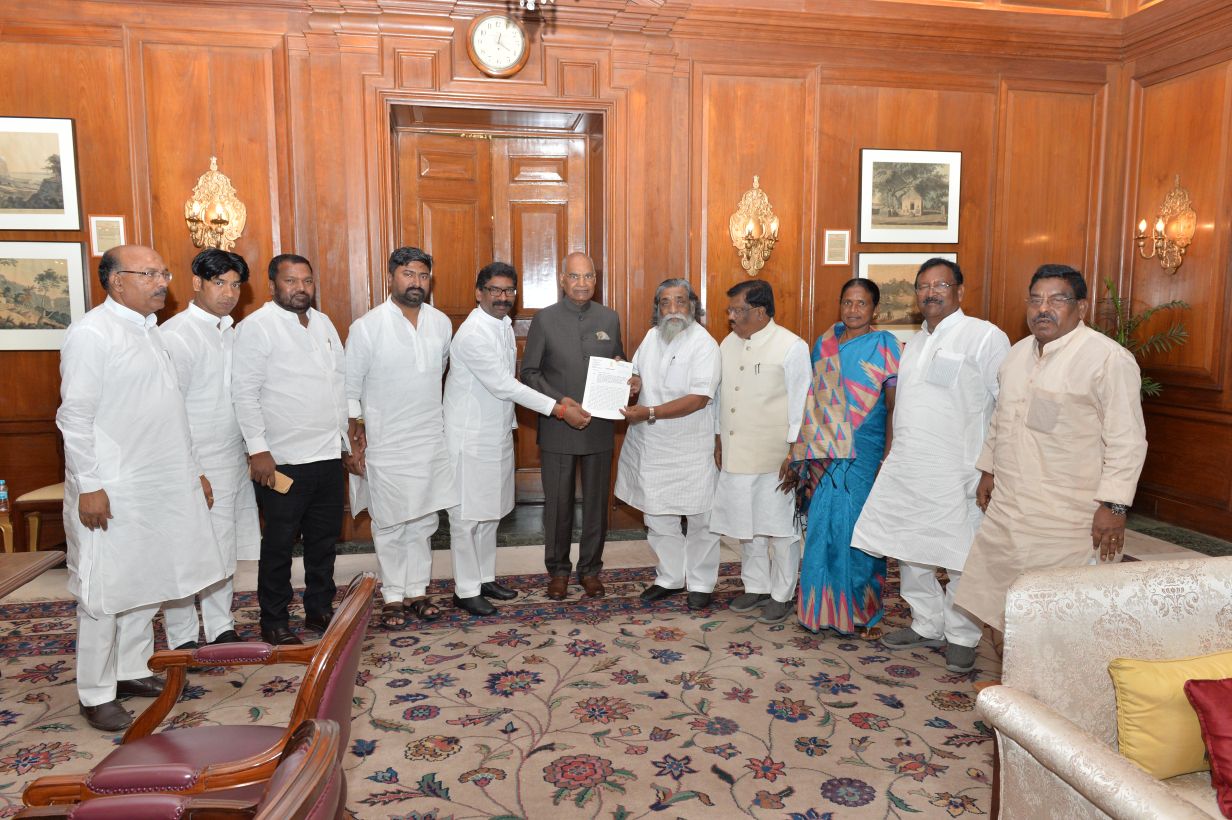 Hemant Soren presented a memorandum and dossier to the Hon'ble President registering the party's strong protest on the amended Right to Fair Compensation and Transparency in Land Acquisition, Rehabilitation and Resettlement Rules as Jharkhand Amendment Bill (2017), due for Presidential approval.

Soren also submitted another dossier to register the party's strong protest against the 20th March Supreme Court judgement on the SC/ST Prevention of Atrocities Act, that seeks to dilute the legal provisions and safeguards of Dalits, Adivasis and the marginalized communities in India.

Jharkhand Mukti Morcha strongly opposes the dilution of the Act by the honourable Supreme Court as data and research by multiple government agencies reveal that diluting the Act would be detrimental to the rights and interests of SC/ST communities.

•    Over 55% of under-trial prisoners in India are Dalits, Muslims and Tribals according to the National Crime Records Bureau data (2016)
•    Over the decade (2006 to 2016)- the rate of crime against Dalits rose more than eight times (746%); there were 2.4 crimes per 100,000 Dalits in 2006, rising to 20.3 in 2016, according to 2016 NCRB data. The rate of crime against Adivasis or scheduled tribes grew by over 12 times (1160%)–from 0.5 per 1,00,000 in 2006 to 6.3 per 1,00,000 in 2016 as per NCRB data
•    The same analysis by media portal IndiaSpend found that the number of crimes against Dalits registered under the SC/ST Atrocities Prevention Act and found to be false at the investigation stage by police has remained the same (less than 6,000 cases) and has actually declined in the comparison to the rise in reporting
•    As of 2016, the conviction rate in these cases stood at 26%, a 2 percentage point decline from the rate a decade ago (28%)
•    Over 500 Adivasis in Jharkhand jails have been slapped with multiple cases and are languishing in jails with the extremely slow progress of their cases. In November 2017, a petition by social activists has been filed in Jharkhand High Court urging the judiciary take cognizance of the matter. Three hearings have been done and next hearing is on 23rd April 2018.  The list of all these undertrial tribals is also attached separately.
•    A series of right-to-information (RTI) requests filed by IndiaSpend has revealed that in 2014-15, almost Rs 32,979 crore under the Scheduled Caste Sub Plan (SCSP) and the Tribal Sub Plan (TSP) funds remained unspent by the Modi government. This was a rise of 250% for funds unspent under the SCSP and the TSP against the previous years.

Regarding the RFCTLARR 2017, Hemant Soren raised the following objections-

•    The quorum for Gram Sabha has been reduced to 1/3rd from 50%. However, eyebrows can be raised on the provision, which determines that if the quorum is not available in the first meeting called, then in the subsequent meetings it would not be a compulsion
•    The Right to Fair Compensation and Transparency in Land Acquisition, Rehabilitation and Resettlement (Jharkhand Amendment Bill, 2017)exempts the restrictions of social impact assessment (SIA) in ten broad categories of land acquisition in the state including scheduled areas under fifth schedule constitution.  (In contravention of PESA act and FRA- Examine Supreme Court order on Niyamgiri mining + Vedanta case)
•    Ten areas - Schools, colleges and universities; hospitals, Anganwadi centres and panchayat bhawans; housing for the poor; roads and railway tracks; power generation and electrification; water-ways and irrigation and other governmental buildings will not require social impact assessment (SIA) which is mandatory in the LARR Act, 2013
•    In the case of Social Impact Assessment, the JAB 2017 reduced the notice period for participation in public hearing from 3 weeks to 2 weeks in Jharkhand
•    Return of Unused Land As acquired under LARR 2013 law – any land lying unused for above 5 years, land returned to either original owners or heirs or reverted to a government land bank: The JAB 2017 has no provision of returning land back to owners, direct return to a government land bank.
•    Example - In December 2017, Jharkhand Government handed over documents of 174.84 acres land out of the proposed 970 acres in Godda district to Adani Power Ltd to set up a 1600MW power plant, a total investment of Rs 15000 crores promising jobs to 10,000 people. However, in February 2018, Ministry of Power rejected the Godda Adani Power project. So what’s the status of the land now – will the State Government not return the land to those who had to give it up?