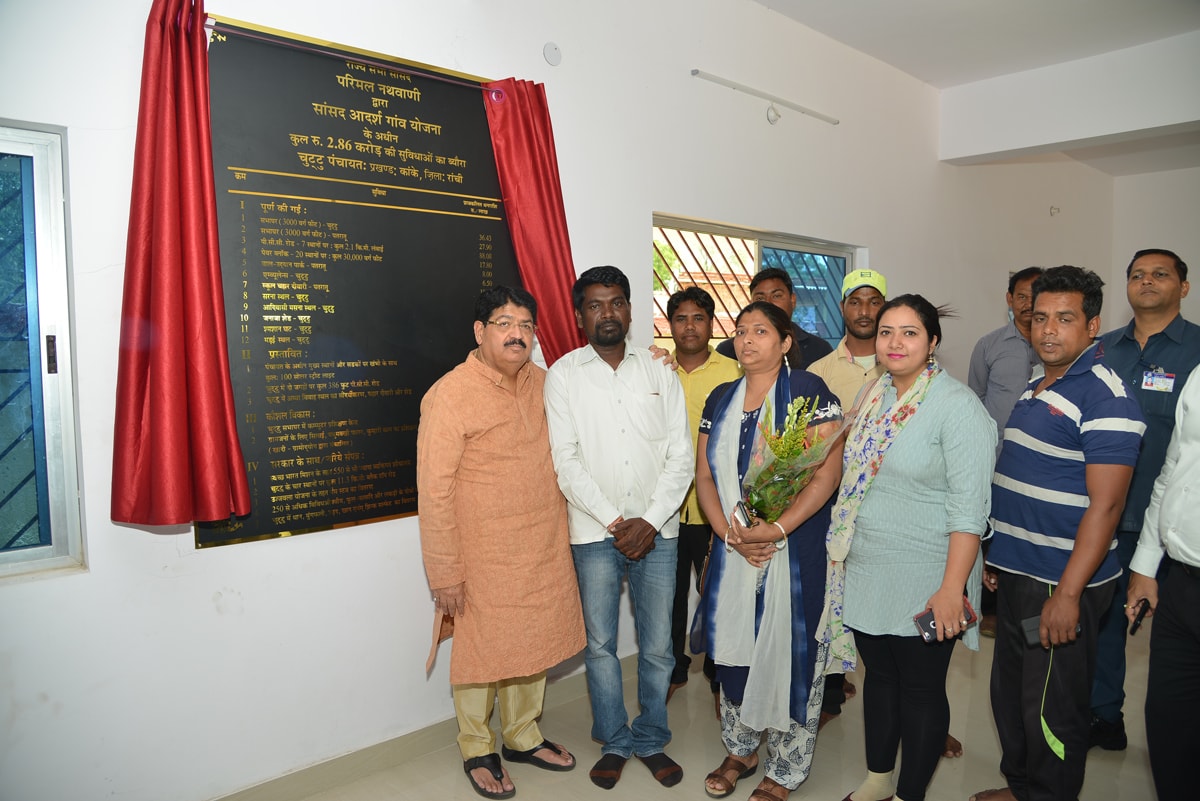 Chuttu Panchayat in Kanke Block of Ranchi District, is on track of development after it was adopted by Member of Parliament (Rajya Sabha) Shri Parimal Nathwani under Sansad Adarsh Gram Yojna (SAGY).

'It is moving fast on road of development", says Nathwani who has implemented development works worth Rs2.86 crore for the betterment of people of Chuttu.

Chuutu is the second Village. Its three villages were adopted by Nathwani under SAGY. The other two are Baram Panchayat and Barwadag Panchayat.

Nathwani who visited Chuttu and surrounding areas took stock of the works completed. Also, he reviewed the work in progress there. More, Somnath Munda, Mukhia of Chuttu Panchayat, Smt. Pratibha Devi, Member Panchayat Samiti Chuttu and other leading people belonging to the area, including youths and women greeted, prompted Nathwani to undertake development work there.

In fact, Nathwani has built two community halls, one each of 3000 square feet in Chuttu and Patratu at a combined cost of Rs64.33 lakh. In addition, 07 PCC roads with a total length of 2.1 kilometers have been built at cost of Rs88.08 lakh to connect the tolas.

A children park at cost of Rs8 lakh has been set up in Patratu village. Playing equipment has been gifted by Shri Nathwani from his personal fund. Further, an ambulance has been donated for service of the people of Chuttu Panchayat. Shri Nathwani also got constructed crematorium, Maraisthal, Zanaja Shed, etc.

“The infrastructure development works carried out in Chuttu Panchayat will help in improving living standards of the people,” said Nathwani.

The Rajya Sabha MP also plans to set up 100 solar lights with poles at main places and streets, build 386 feet PCC Road at two places and beautification of Amba Vivah Sthal along with boundary wall and shed at a total cost of Rs33.30 lakh in Chuttu.

Job creation through skill development is one of the integral parts of SAGY. On this line, a computer teaching centre will be set up in the community hall at Chuttu very soon. Further, classes for sewing and beekeeping have been started and in near future pottery training will be started with help of KhadiGramodhyog Board. “The computer centre will help the youth to keep pace with the world outside. The cottage skills will enable the villagers to look for alternate employment in addition to their traditional means of livelihood,” said Shri Nathwani.

In addition to the development works under SAGY, Nathwani is closely working with the State Government for implementation of various schemes. Under the central government schemes, more than 550 individual toilets have been built under ‘Swachcha Bharat Mission’ and gas stoves will be distributed under ‘Ujjwala Yojana’.

Under state government schemes, 11.3 km blacktop road has been proposed, while more than 250 herbal and flowering plants were distributed. In addition, seeds for paddy, groundnut, pulses, as well as fertilizer and Zinc Sulphate were also distributed among villagers.