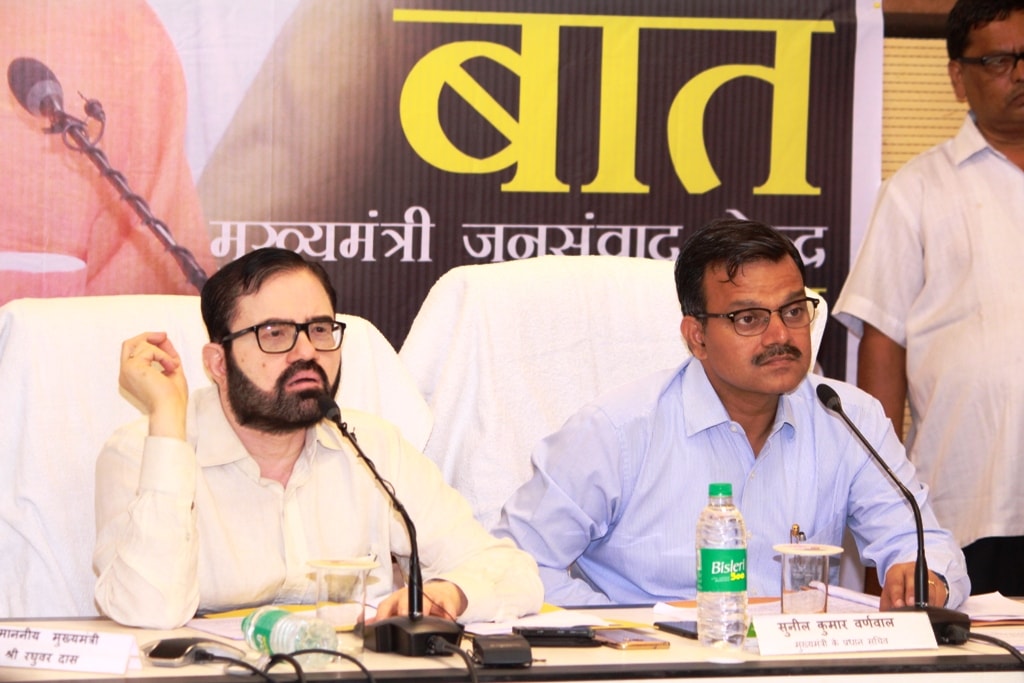 Development Commissioner D.K. Tiwari said that payment of salary to the employees working on out-sourcing in the energy department is becoming a major problem.  All the Deputy Commissioners of the state should review it in their respective districts, with the concerned agency and department; and ensure payment. He also said that all the works should be done properly in Gram Swaraj campaign. Shri Tiwari today in the absence of Chief Minister reviewed the complaints in Seedhi Baat program of JanaSandva Kendra at Suchna Bhawan.  Secretary to CM cum Information and Public Relations department Shri Sunil Kumar Barnwal was also present during the program.

A total of 16 complaints were reviewed and in addition, complaints of several districts and departments including Lohardaga, Latehar, West Singhbhum, Koderma, Ranchi, Bokaro, Dhanbad were reviewed.

Under the Department of Energy, 54 outsource employees in Pakud and 92 outsource employees in Grahwa are not being paid since June 2017. It was stated that due to lack of allocation, the payment is not being made. The concerned department official said that the allocation is made available and superintending engineer has been made the payment instrument. On this Shri Tiwari directed to ensure payment within a week in both the cases.
Only a single accused has been arrested so far in the case of murder of Sandeep Jaiswal in Hazaribagh in the year 2014. Asked in this regard, DSP of Hazaribagh said that the remaining accused have also been arrested. The development commissioner instructed to take the case on the Speedy Trial.

Ultrasound of only pregnant women is done in Sadar Hospital of Saraikela-Kharsawan but other patients face problems due to lack of sonologist. In this regard, the Deputy Commissioner told that it is happening due to lack of Sonologist.  On this, the development commissioner said that ensure the appointment of sonologist within a week and open ultrasound for other patients too, for this take the help of Jamshedpur DC.

Land of villagers was acquired 10 years ago for the North Koyal Project of Water Resources Department in Palamu. The project was completed but compensation in lieu of land has not been paid till now. The development commissioner instructed to pay compensation to all raiyats before 15th August 2018.

The application for the benefit of the Chief Minister Kanyadan Scheme was given in 2016 by Radha Kumari of Giridih, but till now the benefits of Kanyadan scheme have not been received. On this Deputy Commissioner said that due to lack of allocation, the payment could not be made. The development commissioner gave clear instructions to the DC to ensure payment to her within 10 days on a priority basis at any cost.

In the year 2016 in Ramgarh, the water supply was provided through tractor by Kamal Kishore Bhagat and others in the Dulmi block but the payment has not yet been paid. On this the DC said due to lack of verification of papers the payment has not been made. Shri Tiwari directed the DC to complete paperwork and ensure payment within 15 days.