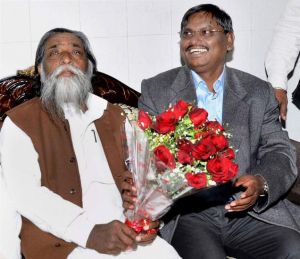 The meeting between chief minister Arjun Munda and Jharkhand Mukti Morcha president Shibu Soren on Sunday has raised hope that all is well.Both had met at later’s official residence in Ranchi.The meeting attended by Soren’s son Hemant,who is Deputy CM,lasted for nearly half and hour against two separate issues.One,the opposition Jharkhand Vikas Morcha and a section of the Congress led by its two leaders Stephen Marandi and Furkan Ansari had launched dharna in Pakur district in Santhal Pargana,stronghold of Sorens,paralyzing supply of coal from the private company Panem’s coal mines to Punjab State Electricity Board.

On Monday Hemant lambasted Babulal for the agitation.”By launching dharna,he(Babulal) has caused a loss of hundreds of crores of rupees.This had brought bad name to our state”,said Hemant.

Two, Soren had repeatedly said that before the BJP-JMM-JD(U) and All Jharkhand Students Union-coalition led by Munda was formed on September 11,2010,the BJP-JMM had agreed to share power for 28 month each.

Soren had also said that in case,the BJP did not agree to hand over power to it,the JMM will topple the Munda government after it completes its 28 month term on January 11.This threat had come from Soren in two separate press conferances during the past over a month.

Since neither Munda nor any one of Sorens had talked about the outcome of this meeting ,no body knows if they had resolved to confront the opposition’s dharna sternly or soberly.But the leadership has called a meeting of the party’s core group in Ranchi on December 5 evenas their body language suggests that all is fine and the dispute between them over sharing power in the ratio of 28:28 months was resolved.Right?