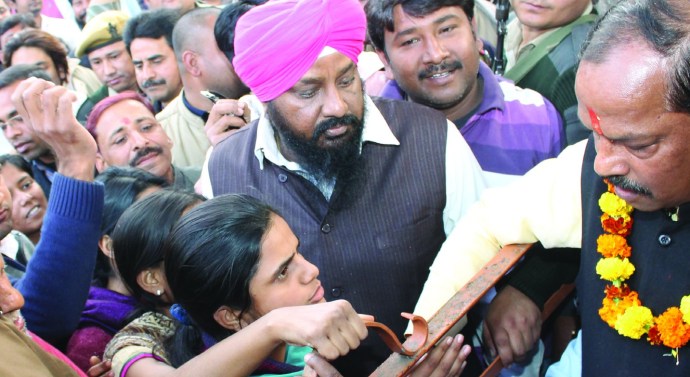 With Assembly poll results going against the ruling BJP in Rajasthan, MP and Chattisgarh and Opposition Congress gaining ground there, a question being debated in public is: Can BJP succeed in retaining 12 of 14 Lok Sabha seats in Jharkhand?

The truth will be known after results of the General elections are declared in mid-2019. But the scene appears to be anti-BJP in Jharkhand. Aware of it, main opposition party JMM has already joined hands with the Congress, Jharkhand Vikas Morcha and Left Parties. If they put up joint candidates in the Lok Sabha polls, it will be almost impossible for the BJP to retain half a dozen of total 14 seats. In the Assembly polls, the results can be even worse. Why?

Apart from anti-incumbency, misgovernance, and failure of the Raghubar Das government to fulfill people's expectations may cost heavy for the BJP.

In 2014, after winning 12 out of 14 Lok Sabha seats, the BJP had secured 43 out of total 81 seats in the Assembly polls for the first time since this state was created in 2000.The people had hoped that its old demands connected with functional Public Health Care units, schools, roads and electricity will be available 24x7. None of these basic requirements were met.

This is evident from the fact that schools and hospitals at the block,division and district levels lacked qualified teachers and doctors respectively.Many roads were pot holed in villages and power cuts were a day today affair.

More,in 2016-2017 the CM Raghubar Das had made imaginative promises-will make 'Switzerland' in Patratu;build 'Times Square' at Morahabadi Maidan and so on.Now,when one moves around in these places,Patratu remains what it was and green Morahabadi Maidan is packed with concrete structure causing air pollution.So much so that many morning walkers have migrated to greener zones.

"It is terrible.We had never imagined that misgovernance can result in such a mess and disaster",cribs a morning walker.

In any case,amid discontent and anger against the BJP government,life moves on and after inordinate delay and criticism coming from the Opposition parties, the Government has finally called Winter Session of the Assembly starting December 24.

Though, actual number of sittings of the House would not be more than three days,it is learnt.

Cabinet Secretary SKG Rahate says that third supplementary budget would be placed during the session. “First day is reserved for oath, placing the Ordinances promulgated when the House was not in session and condolences. December 25 is holiday and then the scheduled businesses would take place on December 26 and December 27 including the tabling of the supplementary budget,” he said.