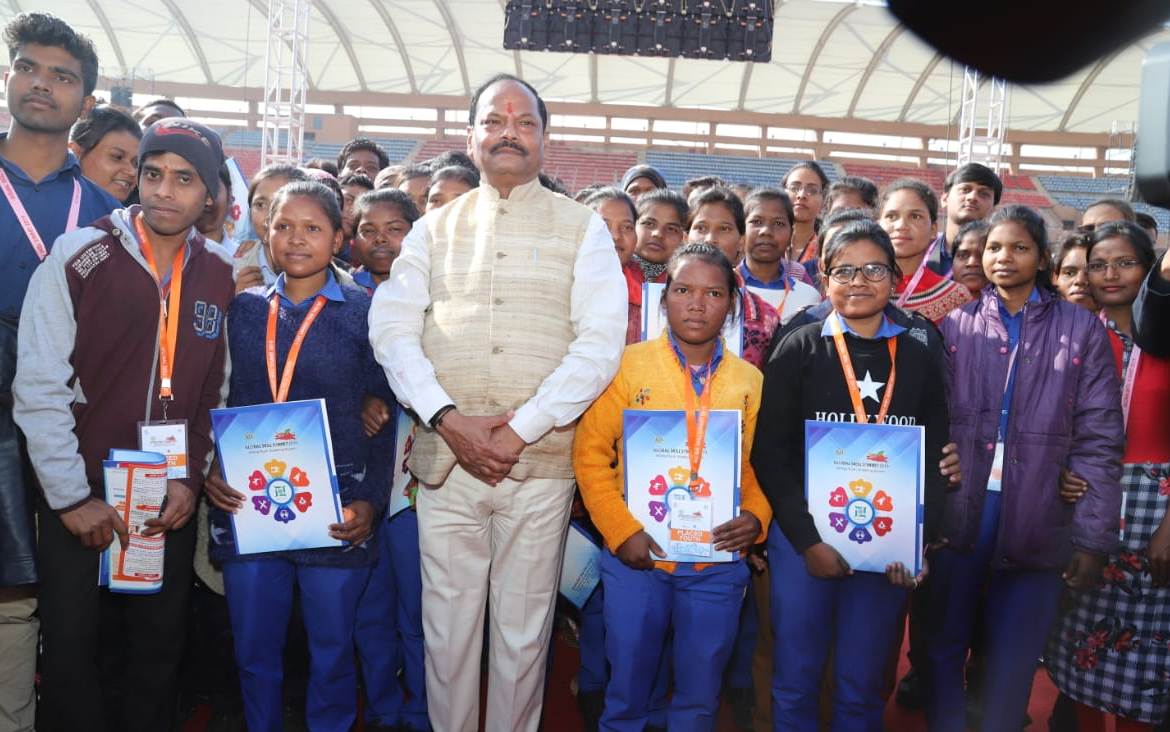 The Governor said that people will have to think about facilitating employment by facilitating skill development training; also our youth get a respectable salary.

Chief Minister Raghubar Das said that in the field of skill development Jharkhand is making history. Giving appointment letters to more than one lakh unemployed youths of the state in Jharkhand Global Skill Summit 2019, is a very good example that the state in moving forward in the path of development. The Chief Minister said that the state has to be taken into the category of a developed state. He said that Prime Minister Narendra Modi has a dream that every youth possess the skill and get employment. For the first time in this country, skill development ministry was formed in order to fulfill this dream. The Government of Jharkhand is working on furthering this thinking of the Prime Minister.

The Chief Minister said that the state government is working with commitment to implement welfare schemes of the Central Government. Even after 70 years of independence, no one worried about the all-round development of the youth, but since the day the government was formed under the leadership of Narendra Modi, Skill development programs is being run in the entire country in mission mode. The Prime Minister believes that the country would be developed only when all the youth will have skill and employment. This thought of the Prime Minister has got a new height under the leadership of the Union Petroleum, Natural Gas and Skill Development Minister Dharmendra Pradhan. Today, this program of Skill Summit 2019 has proven that youth are being provided employment and self employment opportunity at a fast pace.

The Chief Minister said that there is considerable potential in youth power of the country and the state. 65% of India's population is young. India is the only country in the world where 65% of the population is from 20 to 35 years of age. Our state and the country's human resources will be able to work in the country like Europe, America, Japan etc. with skills. The Chief Minister appealed to the youth who received the appointment letter that whatever job you get, work with honesty and dedication.

The Chief Minister said that the youth of the state are very hard working and disciplined. It gives me joy when people from the industrial area and other country appreciate them.

The Chief Minister said that fluctuations in life remain constant. The experience of life teaches a lot. I too came from a laborer family. In life, I have seen too many ups and downs. Today, the person of a laborer family is serving you because of your blessings and love. I also worked in Tata Steel and from there I came to know how important skill development is at the present time. He said that since the formation of government several centers of skill development training have been opened in the state. It is the government's priority to help the youth of rural area as well. Through the Gurukul Skill Development Centre, the youth have been made skilled. As the youth are being trained, the employment is being provided by the State Government by establishing mutual co-ordination with the industrial units and other institutions. In the private sector also, there are immense possibilities of employment in the state.

In his address, the Chief Minister said that youth should follow the path of Mahendra Singh Dhoni who has made the state proud in India and in the world. Regardless of field, if you work hard with dedication, you will surely touch the height of success.
Union Minister Shri Dharmendra Pradhan said that a new chapter has started in the country yesterday. The great men who made the Constitution had arranged reservations for the disadvantaged sections of society. Due to social backwardness and education, caste based reservation was made in the constitution. After 70 years of independence, there has been an unprecedented change in the country. He said that there is no caste of poverty. Poverty is a curse and the government has arranged a reservation on the basis of poverty. For this 10% reservations for the poor of India will be made with 124th Amendment to Constitution.

Dharmendra Pradhan said that this is the first time in the decades after Independence, where one lakh youths are being given appointment letters in the same premises at the same time. He said that many countries' ambassadors and entrepreneurs have also witnessed this historic moment.

The Union Minister said that 50,000 new drivers will be employed by organizing a function in Dubai in 2020. The State Government is working for establishing a driving institute in the state to provide training to 10,000 youths and give them employment in Dubai, which will result in financial prosperity in 10,000 families.

The Union Minister said that the mineral wealth of Jharkhand is getting momentum for many economies and the factories of the country. Jharkhand is a combination of agriculture, industry, mining, culture, manufacturing, construction, tourism, service sector, an industry with skilled and disciplined human force.

Chief Secretary Sudhir Tripathi said that combining the government and institutions, youth is being provided employment. This new identity of Jharkhand started with the operation of new ministry and skill development society for skill development four years ago. He said that it is a sign of satisfaction and pride for us that today we are in a position to create a record of giving employment to 1 lakh youth in a day.

On this occasion, the Chief Minister also inaugurated 6 new skill development centers of the state. He gave appointment letters to 10 youths in the private sector as a token.