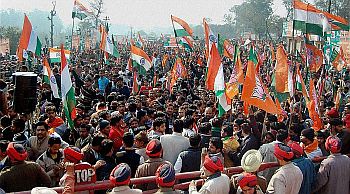 Ramgarh,coal town near Hazaribagh,represented in the Lok Sabha by the BJP leader Yashwant Sinha,gets ready to play host to a show of strength from the ruling BJP which is slated to hold a massive public meeting there on December 21.Billed as “Hunkar”(read Roar) rally,the meeting is expected to provide a platform to Sinha and Chief Minister Arjun Munda to exhort party workers to get ready for the Lok Sabha and the Assembly elections due in 2014.

The move comes at a time when the relationship between the BJP and its ally Jharkhand Mukti Morcha was in stress following the latter’s repeated assertion that the former had to transfer the post of the CM to it on completion of 28 month of tenure of Munda on January 11.This was not acceptable to the BJP.

Without talking about this,Sinha and the team Munda have already made an appeal to the cadres to turn up in large numbers at Ramgarh to prove that no body can beat the party’s record of organizing gigantic rallies.”This is a historic fact and not empty rhetoric”,said BJP’s state unit president Dinshanand Goswami.

The rally is scheduled to be addressed by Sinha,Goswami,party’ state incharge Harendra Pratap Singh and Munda who returned from the US today.