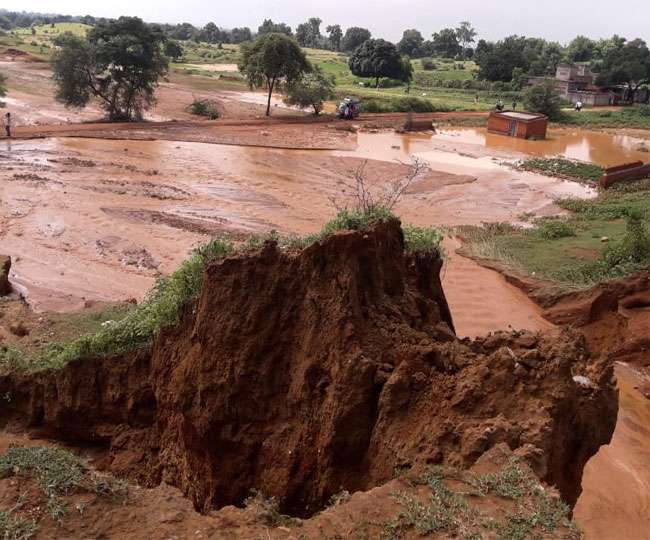 *Picture shows the collapsed area of the Konar dam in Hazaribagh.

Fact sheet revealed that when more than 41 year old and Rs 2500 crore worth Konar Irrigation Project was inaugurated, scores of farmers had clapped.

Many of them had greeted and thanked Chief Minister Raghubar Das for inaugurating it. They believed that their dream to get water for irrigation through canals of the dam had come true. That was in Hazaribagh on Monday

Just a day later, sadly, this costly dam and its diversion tunnels were washed away on Wednesday-Thursday night. Worse, hundreds of acres of land carrying tonnes and tonnes of crops of paddy were flooded causing huge loss to many farmers.

Soon, the opposition party JMM leader Hemant Soren slammed engineers, officers and the Das government. He alleged that this was an outcome of a multi-million rupee Konar scam. He has demanded probe into it.

In defence, Arun K.Singh, who is Additional Chief Secretary and in charge of Water Resource Department whose engineers had built it, attributed the cause to wild rats."Rats had built their side outs. When tunnels were uplifted and water flowed, all rats moved out leaving tunnels lose ground and were washed away", he reasoned.

Another officer on condition of anonymity quipped: "It has exposed these engineers and officers to the solid charge that they had swallowed public funds and done nothing. They did not even check the ground of the dam and tunnels before getting this four-decade-old tunnel inaugurated by the CM. Now, this collapsed dam demands a high powered probe into it to bring justice to culprits."