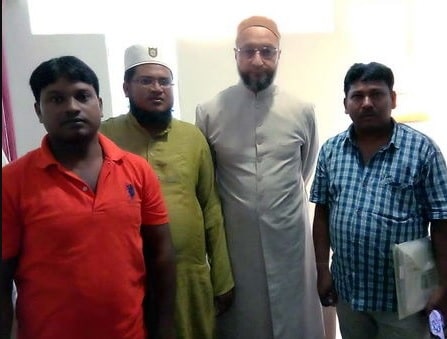 Asuddin Owaisi, President of the All India Majlis-e-Ittehadul Muslimeen, has met the wife and family members of the victim of mob lynching-Tabrez Ansari in Ranchi.

Owaisi who has arrived in Ranchi on his two-day tour to Jharkhand capital on Monday assured them of all possible help.Tabrez's wife Saiista Parveen and uncle Md. Masroor were called from Saraikela, home of Tavrez and his family,to Ranchi to meet him.

Prior to his meeting with them, billboards were put up in several parts of Ranchi welcoming Owaisi.Tavrez's wife and uncle met him and held discussion with him for nearly 40 minutes. He told Saiista that Tavrez's case is pending in the court and he expected that she will get justice. As such, protest and opposition was not correct.

Incidentally, on June 17, a mob had brutally beaten him by tying his body in an electricity pole and compelled him to chant "Jai Sri Ram'  near Saraikela on the charge of mo-bike theft. Next day morning he was handed over to the police that in turn admitted him in a local hospital where he succumbed to injury.

This horrific cruel mob lynching case had shocked the nation. Though the police had registered a case of murder against the accused, it played rock and roll - only to withdraw the charge and clamp the murder charge again against the accused.