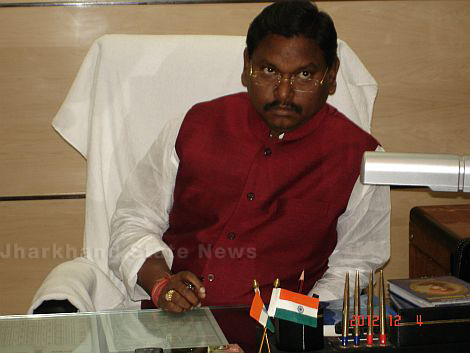 Jharkhand chief minister Arjun Munda today observed that the state he represents is rich in minerals,but its people are poor.

“While the state fulfills the mineral needs of the entire country,the mining had affected environment,agriculture,leading to displacement of people and thereby make them susceptible to join the Naxal activities”,said Munda while addressing the 57th National Development Council (NDC) meeting chaired by Prime Minister Manmohan Singh in New Delhi.

Munda argued that since Naxalism affects 19 of total 24 districs of the state and it suffered in development leading to loss of property and lives,Jharkhand deserves a special category status to deal with its problem of development.

He said that his state qualifies for special status also because the percentage of temporary houses in rural and urban areas is 19.4 per cent and 74.6 per cent respectively,much more than those states which have been granted the special status.

In sectors such as sanitation,human resources,electricity,transport and drinking water,Jharkhand lacked behind the states with special status.He backed the Centre’s Integrated Action Plan (IAP) in its current format, and said that the Centre should grant special funds for infrastructure development of districts selected under it.