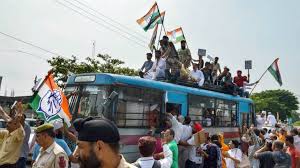 Support or oppose Sunni Muslim women and their children,a number of organisations had called for a Bharat Bandh on Wednesday.Why?

To protest against the recently passed Citizenship Amendment Act and the proposed National Register of Citizens (NRC).Why they were opposing CAA and NRC?

Many leaders of these organisations were not even aware of CAA and NRC and yet they were determined to  carry forward their movement against the Modi government.

Hoswever,the Bharat  Bandh had evoked a mixed response in several areas of the country generating fear that these organisations were at work,running a five -year planned movement against the Narendra Modi government of the BJP.

In Surat,Gujarat and Ranchi,Jharkhand increased security measures were deployed in these cities where shops remained closed and traffic was thin in areas where minority communities of Muslims and Christians resided in strength.

In other areas, keeping in view the call for shutdown,the security forces were on duty without any law and order problem.

According to media reports, the call for Bharat Bandh was given by Maulana Sajjad Nomani of the All India Muslim Personal Law Board (AIMPLB). This was to protest against the controversial CAA-NRC.

This call is supported by an NGO based in Surat, Versatile Minorities Forum (VMF). Apart from the VMF, the call for strikes has been supported by organizations such as Bahujan Kranti Morcha, National Association of Street Vendors of India.

Information circulated by protesters indicated that they are going to spread their movement against the Modi government for the next five years by blocking roads,railway tracks and air traffic to draw attention of the inetrnational media.

Fear and grief in the air is such that a civil war is feared."The government officials and the police should keep in mind the safety of Hindu residents who may face attack by the Sunni Muslim organisations",fear a resident in Ranchi.