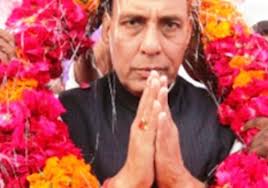 Ladoos were relished and colour powder exchanged by the BJP leaders in Jharkhand after it became public that Rajnath Singh was elected un opposed as the party’s President for the second term.

Rajnath’s election is considered crucial because under his leadership the party will face the forthcoming Lok Sabha elections in 2014.Aware of it and his no non –sense style of functioning,a sense of joy and excitement writ large on the faces of the BJP leaders in this state where the 28 month old Arjun Munda government was toppled by the JMM on January 8.

Incidentally,Rajnath,whose in –laws hail from Palamau,was instrumental in making Munda as chief minister in 2008.

Eversince he has played a key role in guiding and supervising the party in Jharkhand.Apart from the party’s MP PN Singh,Assembly Speaker CP Singh and ex MLA Saryu Rai, he knew many party workers by their names.No wonder why most of them had greeted his election as party’s boss.

Even the BJP’s state unit president Dineshanand Goswami, is equally elated.”His ability to connect with the ordinary people and worker is going to re charge the party”,says Goswami,who is a Munda loyalist.