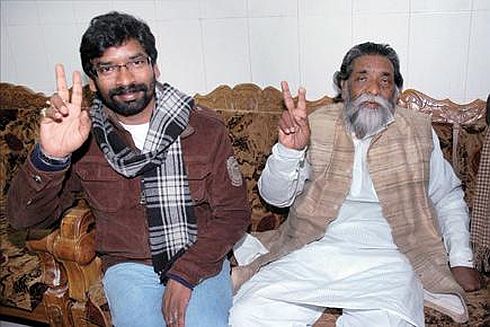 The meeting between Union Rural Development Minister Jai Ram Ramesh and JMM leader Hemant Soren rocked Jharkhand on Friday raising speculations that efforts were on to end the President’s Rule and form the coalition government comprising Congress,JMM,RJD and tainted Independents.

Though the details of the discussions between them were not known,Hemant together with his ailing father Shibu Soren rushed to New Delhi by the Indian Airlines flight.

Apparently,desperate to form the government,both Sorens were facing flak for toppling the 28 month old Arjun Munda government.Withing the JMM,a discontent was evident in the response of its leaders especially those MLAs who were ministers in the previous government.They included Mathura Mahto and Hemlal Murmu who had questioned Hemant’s decision to withdraw support to the Munda government.

The Congress was important for Sorens mainly because its two MLAs-daughter in law Sita and Simon Marandi were accused in the cash -for- vote scam case related with the 2010 Rajya Sabha by polls.The CBI,as per the Jharkhand High Court’s directive,was under pressure to submit its chargesheet.Even Soren feared that he might have to face the CBI in case his role in the coal scam was minutely investigated by the CBI.

To wriggle out of these cases,Sorens were reportedly inclined to accept the Congress’s behind the scenes aspirations to form the coalition government with the backing of the RJD and Independents such as Madhu Koda’s wife Geeta,Enos Ekka and Hari Narain Rai,who were out of jail on bail on corruption charges with its own chief minister.

A logic put forward to push for this coalition was the results of the 2005 Lok Sabha polls when the JMM and the Congress had bagged 5 and 9 seats respectively.Some leaders of these two parties believe that if the they come together,the past may be repeated in Jharkhand.

At the other end,the BJP and its allies –All Jharkhand Students Union and JD(U)-and their rival Jharkhand Vikas Morcha were awaiting the outcome of the Congress,RJD and the tainted Independents’ move.The BJP is likely to gain in the forthcoming Assembly and the Lok Sbha polls,if these parties manage to form the government.

“We will be very happy if this government is formed.It will be a blessing in disguise for us”,said a senior BJP leader Awdhesh Tigga.