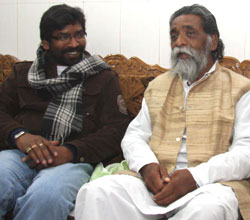 The rally organized by Jharkhand Mukti Morcha in Dumka on Saturday evening made it clear that its president Shibu Soren and his son Hemant still hope that the President’s Rule will end soon and a new coalition government will be formed in Jharkhand.

Though their words make little sense to conscientious citizens and their electoral asset lies in their party’s electoral symbol-“bow and arrow”-and poverty and ignorance of the Adivasis in Santhal Pargana division of Jharkhand,senior Soren said that the term of current Assembly is left with two years.”Against this backdrop,it is not advisable to dissolve the Assembly.We want a popular government to be formed for the all round development of this state”,he said.

Soren said that JMM never feared elections.”In democracy,it is the last resort.Therefore every party should play its role in restoring the popular government.Since the people had given a fractured mandate(in 2010),a coalition government was formed.We never had lust for power.For us the people were the supreme.This is where our strength lies.No party can challenge us”,said Soren exhorting his partymen to go the people and share with them their pain and happiness.

Addressing the rally orgainsed to mark the 34 th establishment day,Hemant lambasted the BJP.”The government fell because of the BJP.There was a deal between the JMM and the BJP to share the post of the CM for 28 months each.But the BJP did not agree to abide by it.We stayed with them for 28 months.But when we realized that the works of the people were not being done,we came out of it”,said Hemant