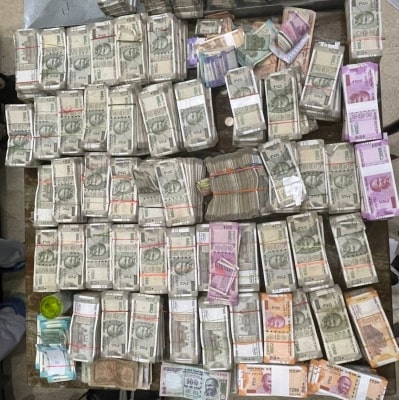 Their car was heading towards the Netaji Subhas Chandra Bose International Airport in Dum Dum when it was intercepted. Besides three Congress MLAs, there were two other persons in the SUV.

Three Congress MLAs were from Jharkhand. They were detained in West Bengal’s Howrah district on Saturday evening after a huge amount of cash was found in their vehicle. The amount of cash will be counted soon.

Superintendent of Police, Howrah (Rural), Swati Bhangalia, said the SUV, with a nameplate saying “MLA Jamtara Jharkhand”, was intercepted on NH-16, in the Ranihati area of Howrah district, following a tip-off.

“We have nabbed three Congress MLAs from Jharkhand, namely Irfan Ansari, MLA from Jamtara; Rajesh Kachhap, MLA from Khijri; and Naman Bixal, MLA from Kolebira; with huge amounts of cash. We will only be able to count the cash when we get the counting machines,” said Bhangalia.

“We had specific inputs that a huge amount of money was being transported in a car. We started checking the vehicles, and intercepted the car in which the three MLAs were travelling. The MLAs are being questioned about the source of the money and where it was being taken,” she said.

While the BJP has demanded their arrest and enquiry to trace the source of their cash, Congress has put the blame on the BJP calling the recovery of this huge cash from the possession of their party MLAs Jharkhand as “ Operation Lotus.”

Jharkhand’s Independent MLA Saryu Roy asked Congress to clarify whether the MLAs were returning to Jharkhand with cash or travelling to some other state. “Where is the source of money — Assam, Bengal or Jharkhand?” he asked.

With the recovery coming amid the ongoing probe in the West Bengal school jobs case, in which the ED has seized about Rs 50 crore cash from properties linked to former TMC minister Partha Chatterjee’s aide Arpita Mukherjee, the development triggered a political war of words in Bengal and Jharkhand.