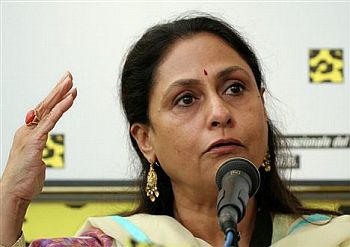 After he used his cell phone and clicked pictures of the Samajwadi Party’s MP Jaya Bacchan on the floor of the Rajya Sabha today,he was pulled up by his own partymen.

The Congress leader Ambika Soni asked Balmuchu to apologise to her.He did it,but Jaya was not satisfied.She looked sullen and angry.

A SP leader Sujit Yadav said:”Balmuchu can not be pardoned.”

Back in Ranchi,a BJP leader Dinkar Kumar has blasted Balmuchu who had won the Rajya Sabha seat for the first time from Jharkhand.’He has furher dented the image of Jharkhand.’