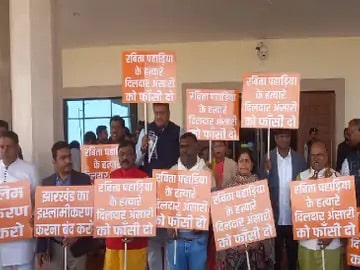 Jharkhand Assembly witnessed a ruckus on the first day of its winter session. The BJP MLA Randhir Singh was marshalled out.

This BJP leader raised the case of Rubika who was brutally murdered by her husband Dildar Ansari. Her body sliced into several pieces were found packed in plastic packets in a village in Godda on Friday.

Since she was a tribal girl and the accused was Muslim, the BJP MLA described it in his own way. ”She was a victim of love - jihad”, yelled Randhir Singh on the floor of the house as his party MLAs stood carrying posters in their hands.

Singh was highly critical of the Soren government saying that the CM of the state is tribal and a tribal girl was horrifically murdered. “ By arresting the accused the issue will not be washed away”, he said on the floor of the house on the first day of its winter session.

After he was marshalled out from the floor of the assembly, BJP MLA Randhir Singh said that he was happy to raise the heinous murder of one tribal girl.” I will continue to raise this kind of crime being committed in our state.”