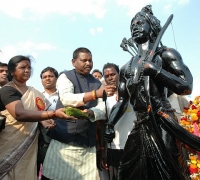 Just four months ago,he was the chief minister,trying to put this state on track to development.Now,Arjun Munda leads a revived,regrouped BJP that is drawing battle lines for the Assembly and Lok Sabha polls.

Behind Munda’s stodgy façade lies a flair for organization and compromise that has brought together factions led by Yashwant Sinha and Karia Munda who felt betrayed by the coalition comprising JMM and dejected and numbed mainly due to the failure of his government to meet their expectations.

Leaving the JMM behind,Munda has gained the confidence of both Sinha and Karia Munda.Now,he is set to meet party workers at the district,block and panchayat levels across Jharkhand.

During the past fortnight,a couple of party workers meetings addressed by him in Ranchi,Giridih and Hazaribagh indicate mainly three things.

One,he was going ballistic against his rivals-JMM,Congress and JVM.This was because he knew,they will be the main rivals of the BJP in the next round of elections.

Two,he has not spoken a word against the party’s two other allies-JD(U) and All Jharkhand Students Union.This was in accordance with his game plan to keep them as allies for the post polls,

Three,in the coming elections,the BJP may not enter into pre poll alliance with any party and field its candidates in in all 81 Assembly and 14 Lok sabha seats in Jharkhand.

In any case,the party lacking in a tribal leader worth his name and recognition,had to rely on him who was acceptable among a cross sections of non tribal electorates in Jharkhand.Aware of it, BJP president Raj Nath Singh gave Arjun Munda a new lease on political life.

Now,whether he succeeds in realizing the goals of the party will not only depend on many factors such as what he does and the strategy his party follows to finalise the list of winnable candidates,but also on how these faction leaders behave and conduct themselves.