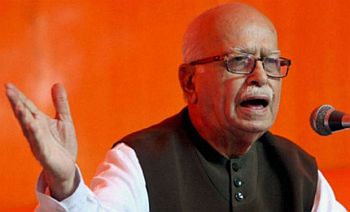 Under this headline,Mid Day today published a byline story authored by Ravikiran Deshmukh.

The story is revealing.Based on his ‘sources’,Deshmukh states that “the senior leader had laid down three conditions before the party a day before he resigned from all posts; the BJP top brass rejected them all.”

His article further said that Advani had drafted his resignation letter on Sunday itself, a day before he communicated his decision to the party and his supporters.” Before the high-profile drama that unfolded yesterday, sources say that Advani had forward three conditions before the party one of them was that he be announced as the prime ministerial candidate of the party, and be allowed to hold the position for at least six months if the BJP-led NDA comes back to power”,said Deshmukh’s story.

It further adds on the basis of his own ‘sources’ that: “Advani believes that he is the prime contender for the top job owing to his contribution to the party for several decades. Advani was even ready to quit the post after six months if any other leader wished to come forward, sources said. Advani’s second condition was that Gujarat Chief Minister Narendra Modi should be made the convener and not the election chief’s role in the party.”

More the article said:”While the third condition that he laid before the party was that even if Modi is made the chief of election committee, he should report to him, and that it will be he who’d call the shots. Sources said that Advani wanted to strategise the poll campaign and wanted to be the party’s key decision maker. However, the RSS wanted the party to announce Modi’s appointment as the campaign committee chief, which resulted in a difference of opinion between the two groups following which Advani resigned yesterday.”

Also saying “Go Goa Gone” Deshmukh writes: ‘sensing the mood of the octogenarian leader, BJP president Rajnath Singh had asked his son Pankaj, general secretary of the party’s Uttar Pradesh unit, to stay back in Delhi. Pankaj was constantly in touch with Advani and had even kept a chartered plane ready to take him to Goa if he changed his mind. However, the leader did not budge and stayed away from the highly publicised party meet in Goa, sources said.’