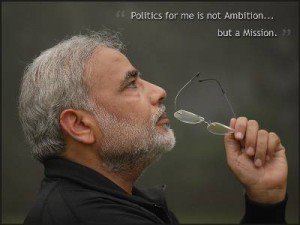 Whether or not the 2014 Lok Sabha polls will be a straight battle between the Congress and the BJP, Narendra Modi has already pounced on Rahul Gandhi challenging the Congress General Secretary to campaign in Gujarat.Reacting to the Congress’stand that Rahul will not campaign for the party in the coming Assembly polls in Gujarat,Modi pulled up Rahul.”Why,the People of the state and I want to know the reason.Does he think Gujarat is so bad that he won’t campaign in the state”,asked Gujarat Chief Minister while addressing a rally in Mota Pondha village in Valsad district.

Throwing an open challenge to Prime Minister Manmohan Singh and UPA chairperson Sonia Gandhi, Modi said he was ready for any contest.Smiriti Irani,a BJP leader,also named Rahul in her speech.”How can he come to Gujarat asking for votes when the electorates in Uttar Pradesh had voted against his party”,Irani told the audience.

In the last general elections in 2007 Rahul had extensively campaigned for the Congress in Gujarat.