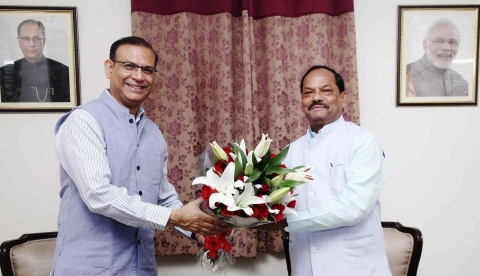 Also,the CM appealed to him to increase the number of flights between Ranchi,Kolkata,Patna and Mumbai and sought to add a morning flight between Ranchi and New Delhi.

In response,Sinha is learnt to have said that he will soon act toward his demand and contact private airline companies to hold a survey.He promised to provide air service to link Ranchi with Jamshedpur,Dumka,Dhanbad and Hazaribagh.

The CM told the Minister to connect Ranchi with small cities in the state as well.The meeting between the CM and the Minister was attended among others by Jharkhand Chief Secretary Raj Bala Verma,the CM’s Principal Secretary Sanjay Kumar,Additional Chief Secretary Amit Khare,Secretary(Transport) K.K.Khandelwal and Principal Regional Commissioner based in New Delhi D.K.Tiwari.