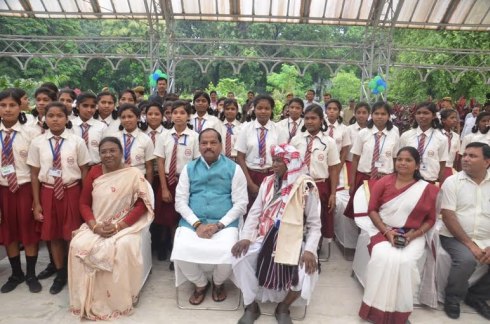 In effect,it gave a massive boost to the green campaign launched by the BJP government across the country.

“The planting of trees is not only the work of the government.It requires collective action”,said the Governor Draupadi Murmu to mark the historic event.She appealed to the people to plant fruit bearing trees in large number.

The Governor opined that “we have to protect the greenery of the state.In our life,we have to plant more and more trees and keep them alive.”

She suggested that the trees of different breeds should be planted on occasions of birth day,anniversary and marriage to make them memorable.

“The environment has been experiencing pressure mainly due to population growth.As such,the trees were necessary not only for greenery,but for the human society.The name Jharkhand means that it is the land of forest”,said the Governor.

Inside the Raj Bhawan a pond measuring 120 feet long X 80 feet wide X12 feet deep was dug up and saplings planted along its bed.

A report released by the Governor’s office claimed that inside the Raj Bhawan premise spread over 52 acres of land,500 Sal trees and 3000 fruit plants were planted on Friday.

The entire planing of tree plantation and construction of the pond was made by the Governor’s Principal Secretary Santosh Kumar Satapathy who is credited to have planted hundreds of trees in different parts of Jharkhand and Orissa as well.

On the occasion,the Pdam Shree Simon Oraon and the Chief Minister Raghubar Das who were present at the Raj Bhawan had promised to plant one crore trees during the monsoon period beginning July 1,2016.

1.shows (from Left to Right)Governor Droupadi Murmu,Chief Minister Raghubar Das,Padamshree Simon Oraon and others with Kasturba gandhi students in the background inside the Raj Bhawan premise on July 15,2016.

2.shows Governor Droupadi Murmu handing over a sapling to Chief Minister Raghubar Das with Padamshree Simon Oraon in the middle.