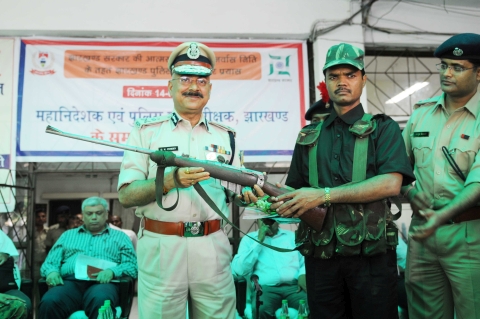 Ratan Lalâ€™s picture shows the CPI(Maoist) senior leader Bara Vikas alias Balkeshwar Oraon handing over his gun to the DGP DK Pandey to mark his surrender at the Police Headquarter in Ranchi on Thursday.

The police is in cheers.Reason?A top Maoist had surrendered and handed over his arms to Jharkhand DGP.

The Maoist was identified as Bara Vikas alias Balkeshwar Oraon.He,who was an accused in more than a dozen cases of murder,extortion and possession of illegal arms,was the member of the CPI(Moaist)’s “Special Area Committee” having jurisdiction in three states of the country-Bihar, Jharkhand and Chhatishgarh.

Oraon surrendered before Jharkhand DGP D.K.Pandey and other senior officials at the Police Head Quarter in Ranchi on Thursday.