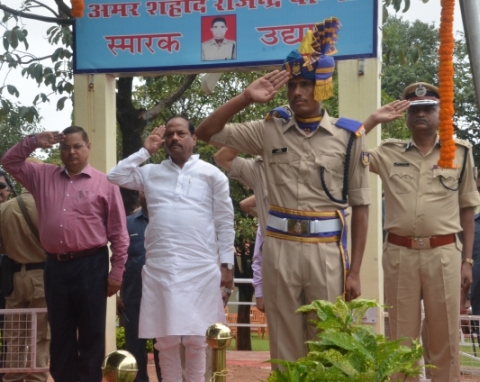 Jharkhand Chief Minister Raghubar Das on Tuesday paid tributes to CRPF jawan Ajay Kumar who was killed in a gunfight with Maoists in Jharkhand on Monday.

The encounter took place at Budha Pahar located along Jharkhand-Chattisgarh border in Latehar district.Kumar represented the Cobra Battalion of the Central Reserve Police Force.During the gun battle,he had got injured only to succumb to injuries later.

His body was brought to the CRPF camp in Ranchi.On Tuesday,the CM Das,accompanied by Additional Chief Secretary incharge of Home Department N.N.Pandey visited the CRPF camp and paid tributes to him by offering a bouguet of flowers.

On the occasion,the CM opined that violence is not a solution to any problem.”The misguided youths should surrender.Otherwise to maintain law and order and peace,the state can use any element of its power”,said the CM.